. Plunk in the cross-hairs was a statue of Guido Monaco. The Hotel Aretino was a short block and a half off this rotary.

With the option of two trains in the 9 o’clock hour, I let my body decide when I’d get up. And it decided 8am, so I was fresh and packed and went down for breakfast by 8:30; collected my bag and checked out and was on my way to the station before 8:45; and in the station checking for the platform for the 9:04 to Arezzo with 8 minutes to spare. The hour train ride brought me east in Tuscany, to the city of Petrarch.

We arrived at the middle platform, and I took the lift down to the subway and then up. It took me 8 minutes to wheel the roller the 400 meters to the Hotel L’Aretino, where I registered and dropped my bag. A relatively narrow yellow building, there were a café and a retail store bracketing the entry door, a step up from the sidewalk.

With nearly 90 minutes before my only appointment, I headed out up the street that the hotel fronted, which was the major shopping street. First stop, the Basilica di San Francesco. From my research notes: the Church of San Francesco is home to Piero della Francesca’s greatest masterpiece, the fresco cycle known as La Leggenda della Vera Croce (The Legend of the True Cross). Approaching this late medieval church, it presented an unadorned brick front, with horizontal striped layers extending slightly. Two wooden doors, to the left to a side aisle where an exhibition is being held, and the central double door, double high in a simple arch yielding to the nave. 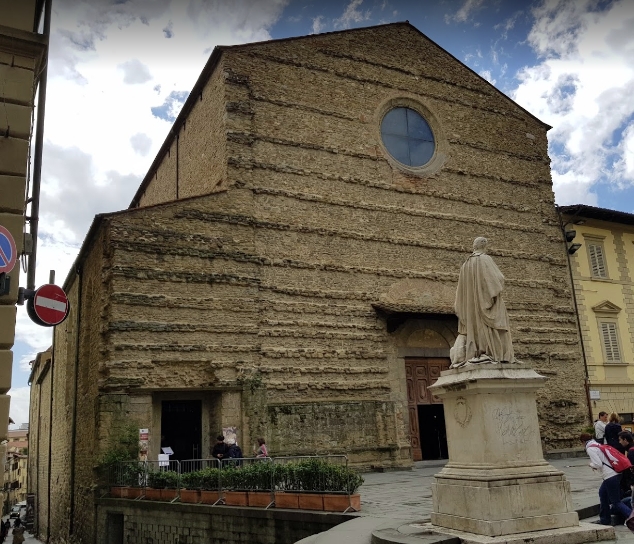 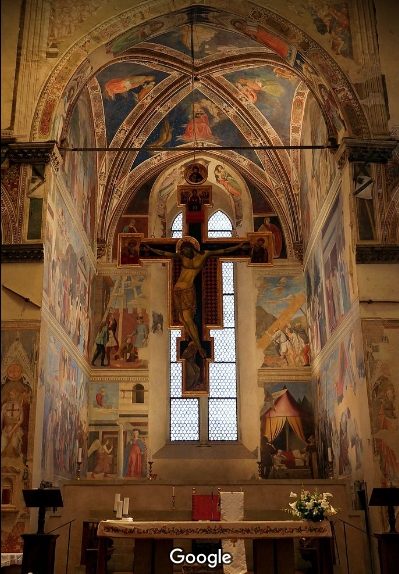 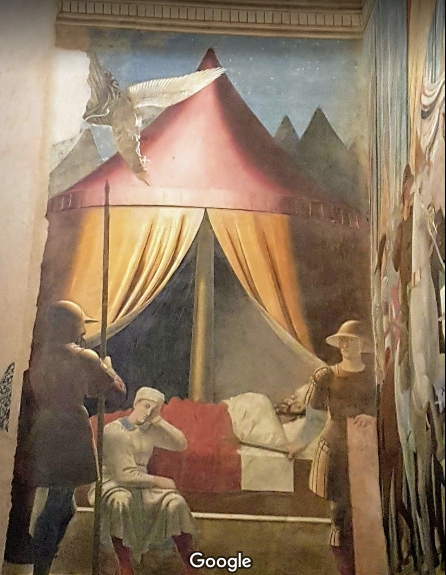 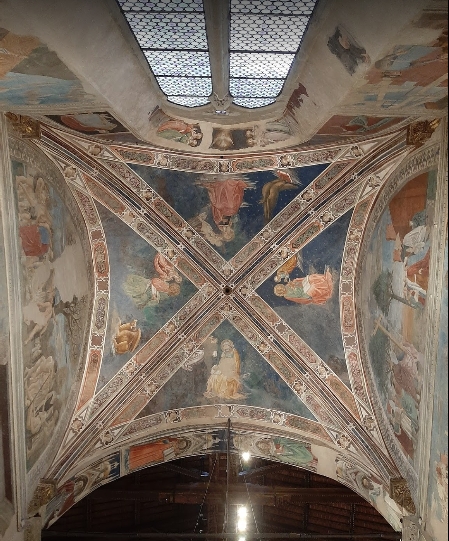 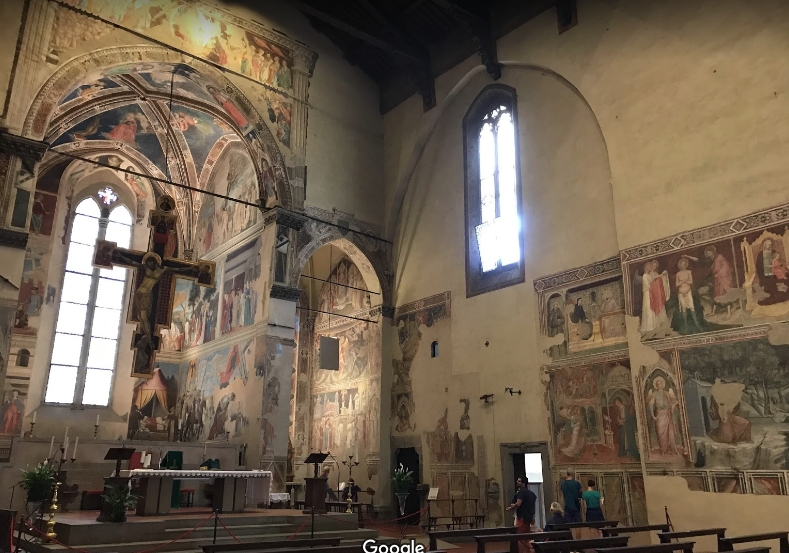 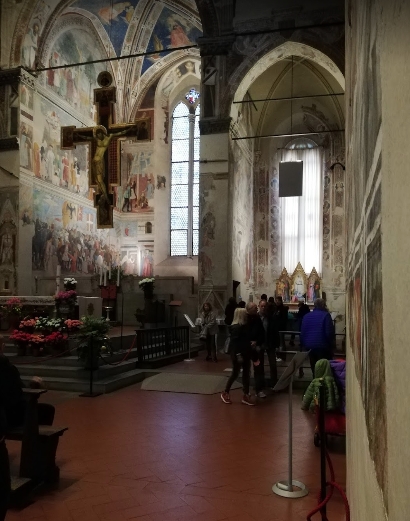 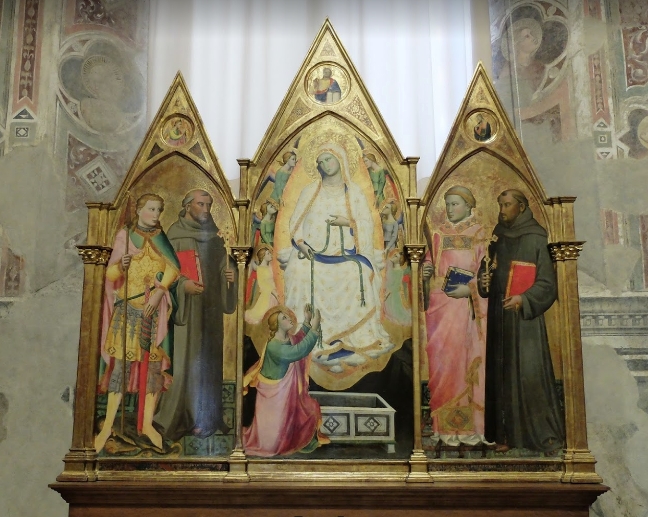 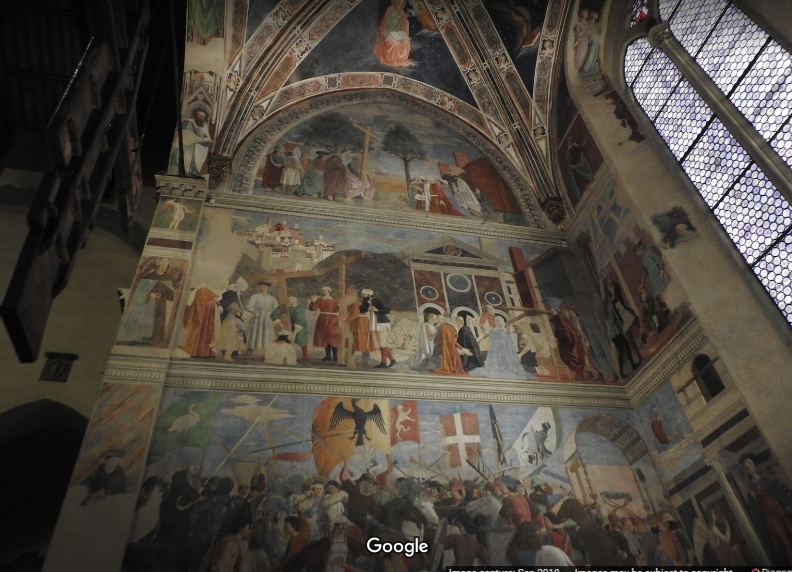 Inside, there are 4 side altars on the left side of the nave. In the center chancel, the Legend of the True Cross/Golden Legend is portrayed on the walls. They are in remarkable shape for mid-15th century frescoes. To the right, a small chapel has a lovely triptych. The ceiling vault is groin jointed, in very dark wood. A separate altar to St Francis is to the left of the main altar with a large oil of the saint in rapture of the overhead vision of the Virgin.

Leaving, I turned left down the street, and was faced by Badia delle Sante Flora e Lucilla. Adjacent to a monastery, the interior of the church was renovated by Vasari, including the main altar, who also designed the bell tower. I made a brief visit, as the church was quite dark, and then returned outside and went next door.

Valeria was standing outside the Teatro Petrarca, awaiting me for a noon tour of the newly renovated theater. I’d made the arrangements in late January by email. She is a guiding light for the Foundation for Guides in #Arezzo, and was doing this on her lunch break. Today’s tour was outside the normal schedule of guided tours, but as it was my only day here, she was graciously doing me a favor. 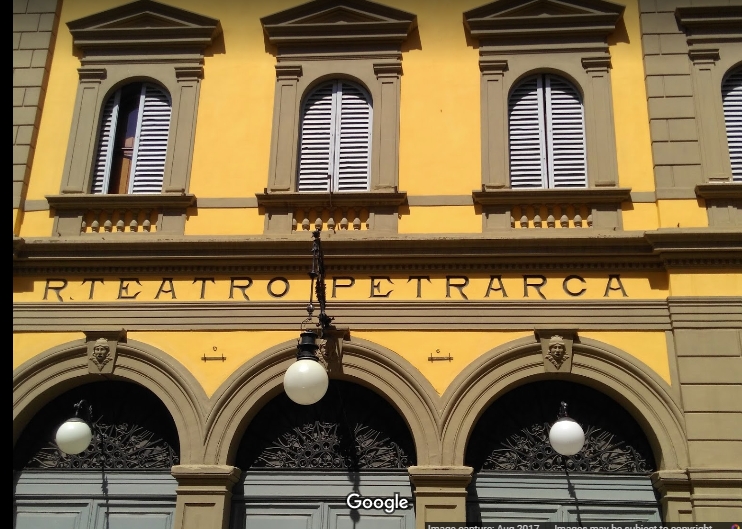 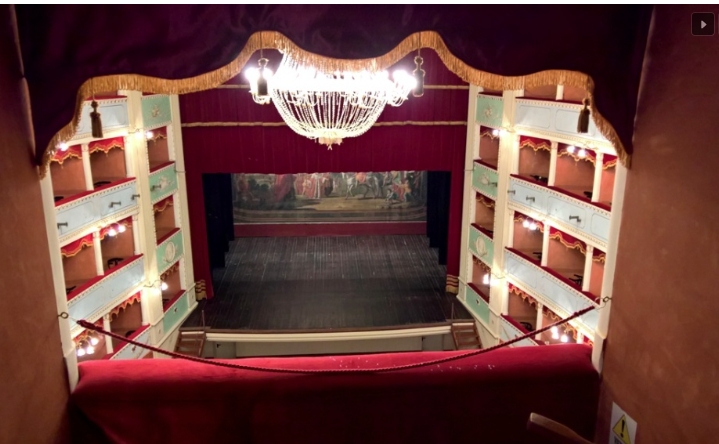 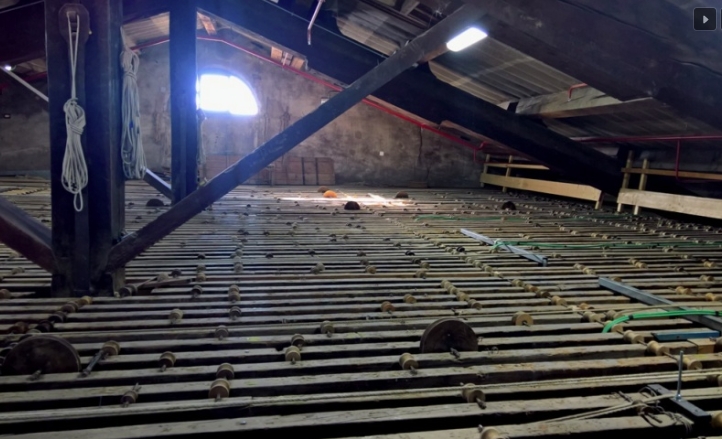 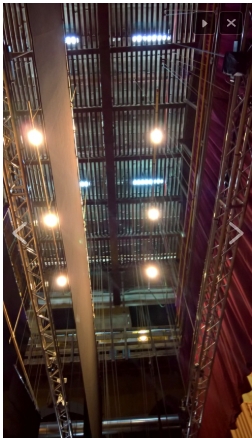 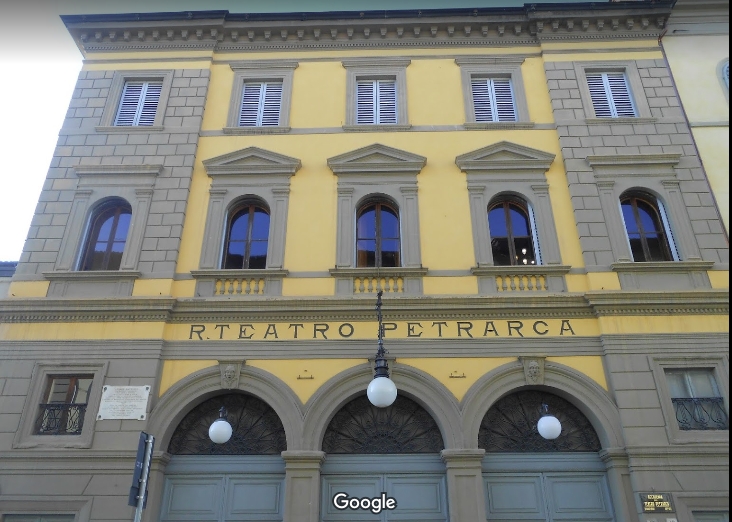 The tour focused on showing the backstage machinery, but Valeria explained the several restorations, including the most recent; the history of the building and shared a few secrets. From backstage looking at the flies, with the lights and sets hanging above, to the boxes in the house and up to the very top to see the spyholes used for that special spotlight. And she let me walk out on stage and sing my one liner again.

She wouldn’t let me take her to lunch, but she did suggest Dal Moro, the deli down the street, for lunch and Osteria Vineria La Sala dei Grandi Arezzo for dinner.

A teepee with pictures of their sandwich offerings out front made it easy to order, and they have tables to sit at in back. Bresaola di Chianina was delicious, lean, flavorful, served without any bread, on a plate with extra virgin olive oil and some bits of cheese. With a small green salad and a glass of house red, I was a happy camper.

Still early afternoon, the cathedral wouldn’t open until 3pm, so I headed to the second church of note, Church of San Domenico. 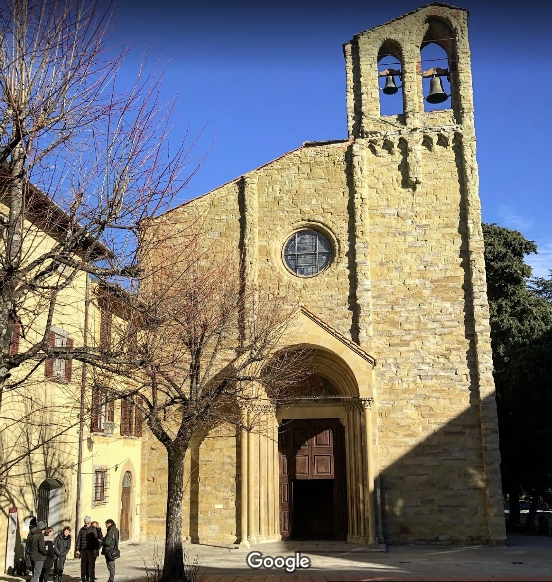 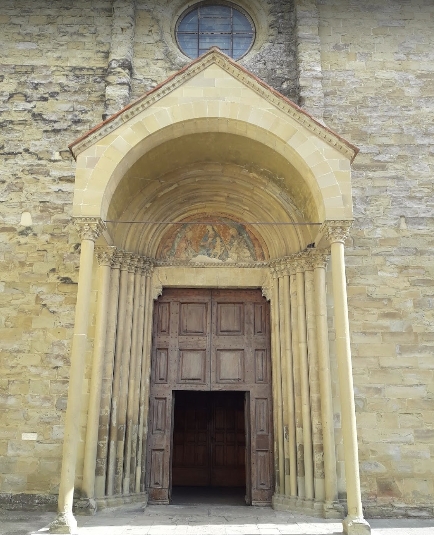 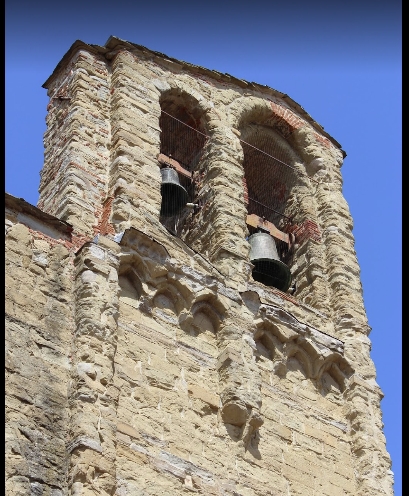 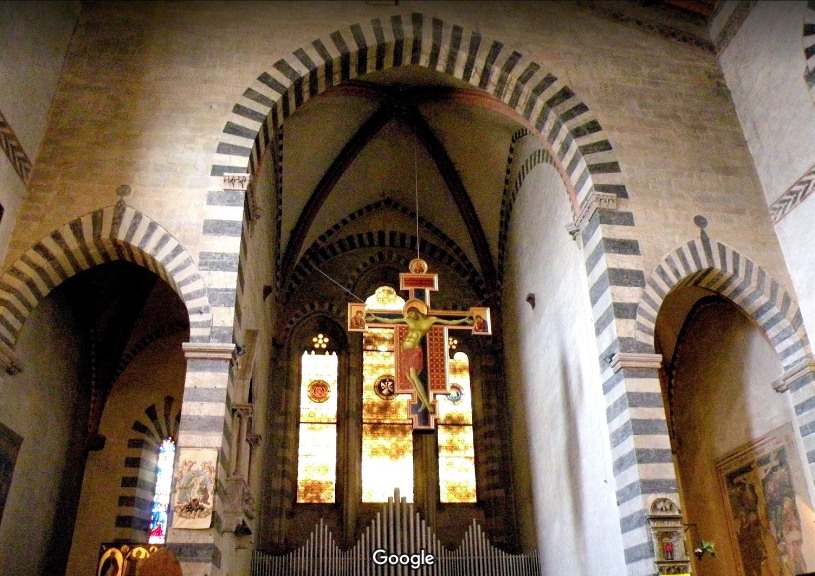 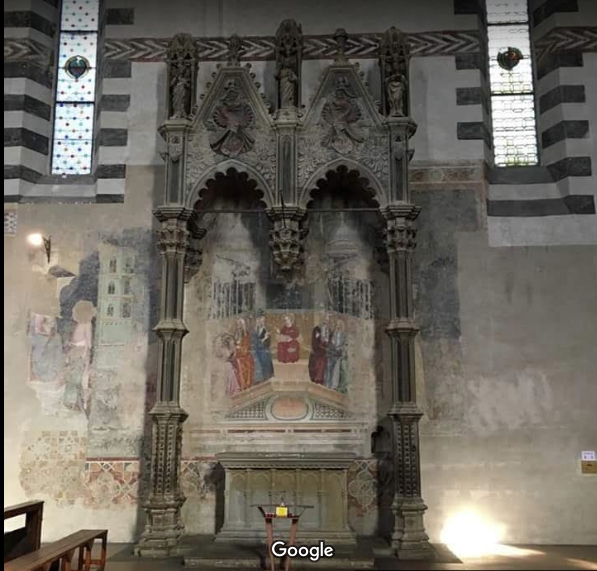 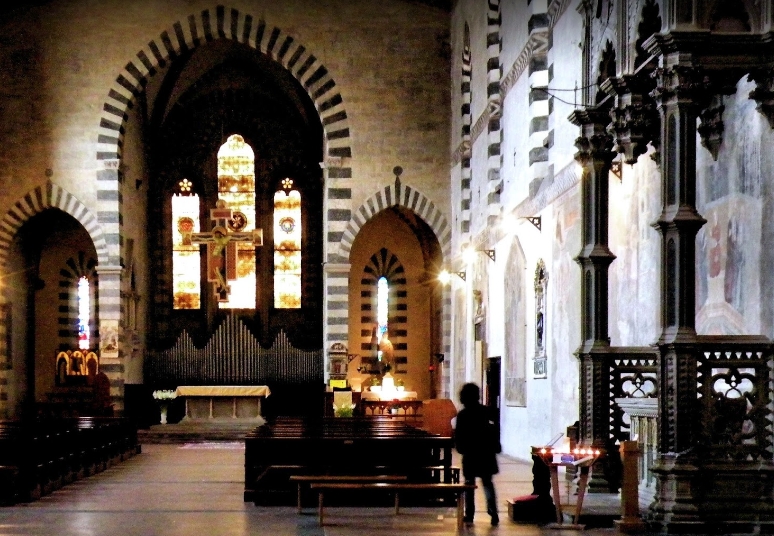 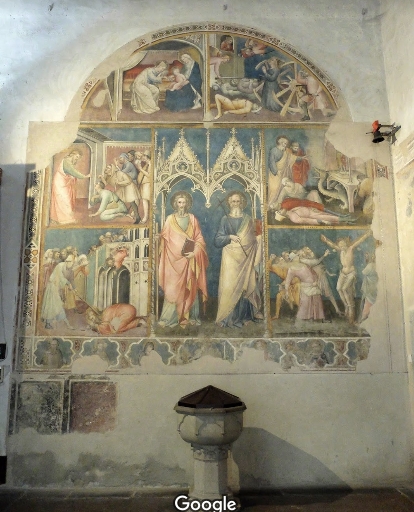 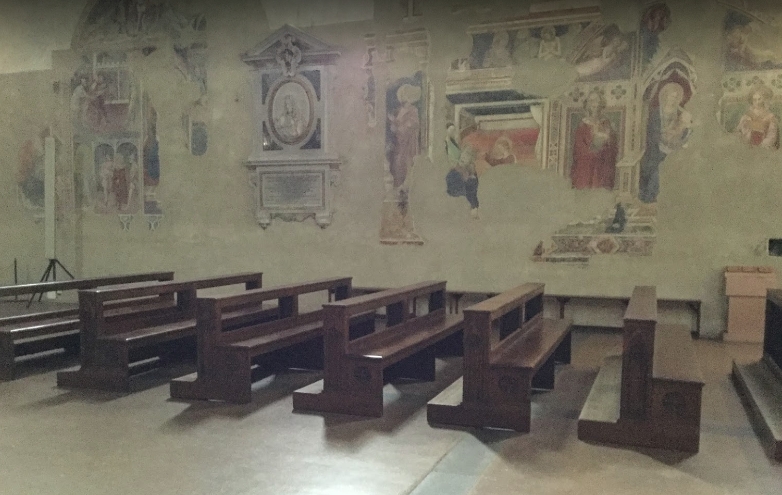 The Basilica di San Domenico contains the 13th-century “Crucifix” painted by Cimabue. Per Wikipedia, the exterior is a sober Tuscan Gothic style. The entry portal porch has a fading fresco. Inside, it is fairly austere. The main altar highlights the crucifix, with modern organ pipes and three stained-glass windows behind. I found the fresco by the baptismal font more intriguing than the one backing the side altar with all the elaborate black marble embellishments.

When I left, I began a slight climb to the cathedral. At the corner, the Palazzo Albergotti, a 14th century palace with a 13th century tower, stands.

After walking past a study center, which has a garden shared with the palace and the church offices, a narrow Piazza del Duomo brought me to the western façade. The Cattedrale di Ss. Donato e Pietro sits on a rise and is reached by a flight of about 18 stone steps to a plaza around the building. The apse end is actually down 6 steps. A standalone hexagonal stone bell tower is located at the northeast corner, capped with six clocks and a red tile pointed pinnacle. 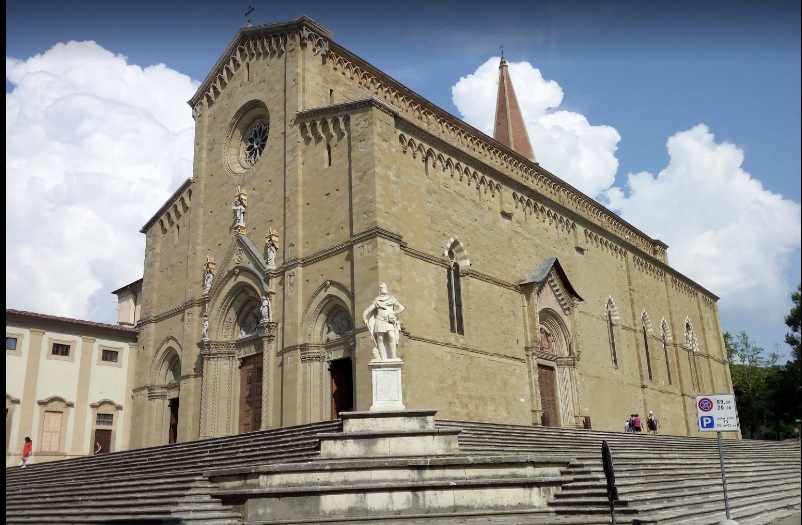 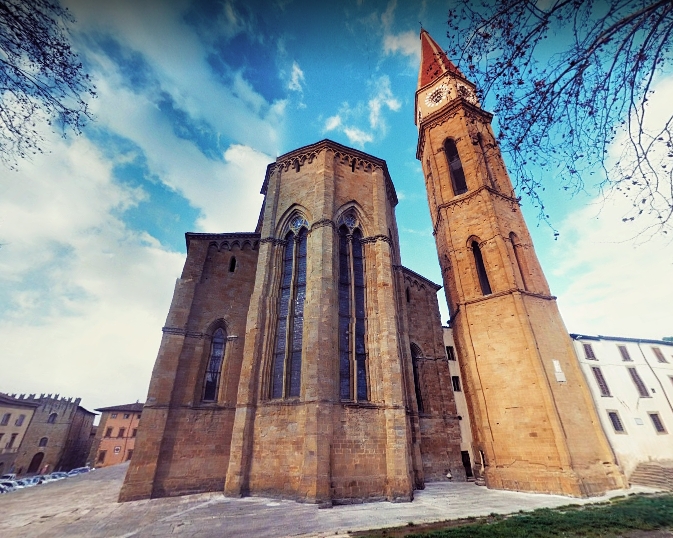 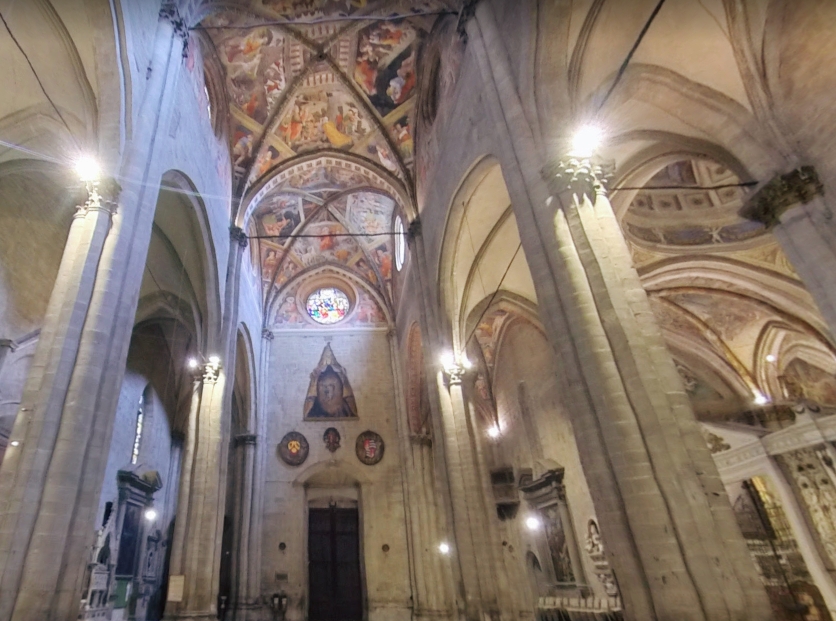 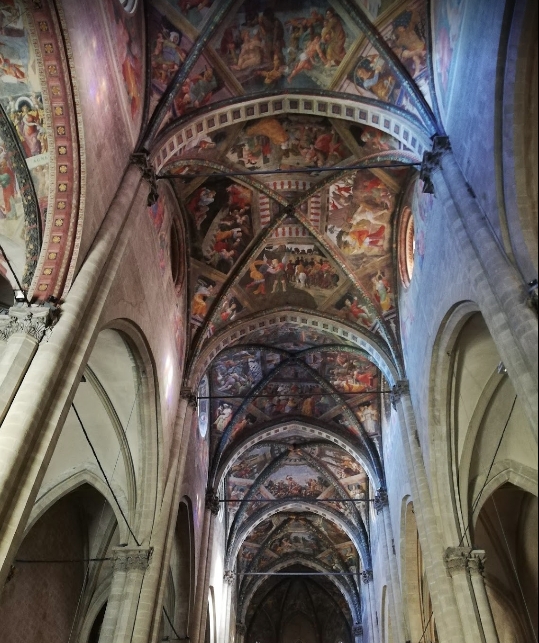 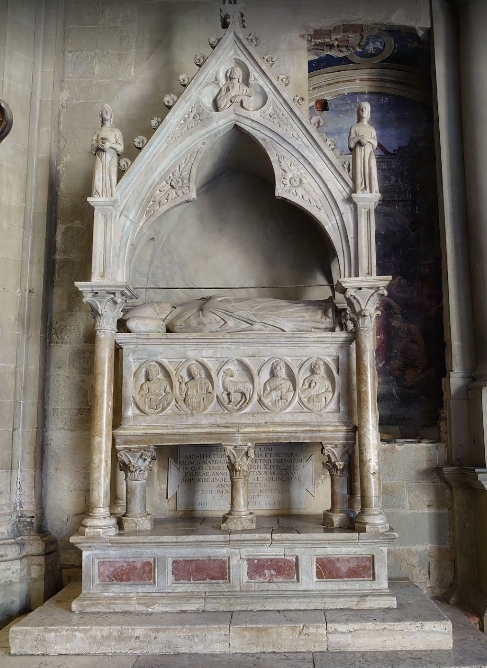 Inside, the high side aisles have narrow (in depth) shrines. The central aisle vault has elaborate artwork in the ceiling. This cathedral is considered by many to be one of the finest examples of Gothic architecture in Italy. While not overwhelming, the embellishments are tasteful and spaced. Space is preserved. At the high altar, a very large carved structure, an arch to the patron St Donatus has place of honor. A funerary arch sits on the south side for Pope Gregory X. While not built in a traditional cross layout, there is a single transept to the north. Behind white columns with filigree ironwork and a gated door, it is domed and more ornate than the high altar. I had to hunt, but I did find a 15th-century fresco of Mary Magdalene by Piero della Francesca.

Upon leaving the cathedral, it was a short walk to the House of #Petrarch, albeit his father relocated the family to Avignon when Francesco was 8 and he died in Padua. Now a museum, the library is rather impressive.

There is a large public park nearby, Passeggio del Prato, which includes a monument to this son of Arezzo. The park was a nice place to sit and rest on this overcast day. Mainly trees, grass and walkways, it is the border to the north before agriculture begins. The city cemetery was to the east.

Walking south through the park and then a bit east, I arrived at the Park of the Fortezza Medicea. The Arezzo version, as there are fortresses in other cities that the Florentines ruled, is presently a skewed pentagon, a park and historic monument, as fortifications had been here for a millennium. They’d been built, torn down and rebuilt. The walls offer some great views. I had to hike back up the rise to the cathedral and then began the descent towards the hotel. The slope leveled out about the time I reached the Basilica of St Francis, so I shifted a block west to have a different view. Via Guido Monaco is partially tree-lined, and has a number of restaurants fronting it. A plaza, used for parking, opened when I got to the postal offices. A large rotary, with formal gardening and trimmed bushes was a pedestrian escape at the crossing with Via #Petrarca.

Plunk in the crosshairs was a statue of Guido Monaco. The Hotel Aretino was a short block and a half off this rotary.

Not quite 6pm, I collected my key and headed up the lift to the top floor, in the back corner. A nice room, I moved the desk chair and opened the roller on the floor.

Sitting with my feet up, I began updating the journal with my finds since lunch. Ready for a cocktail, I decided to check out the restaurant Valeria had recommended, as it was also a wine bar. Four blocks (less than 200 meters) and I was there in 5 minutes.

Narrow, next to a chips fast food place, I decided a glass of wine and a nibble, and then dinner elsewhere. Gino pulled out a local organic winery, Podere di Pomaio. A 100% sangiovese, IGT Toscana Rosso Porsenna, it was a pale ruby red with decent tannins and acid. Vinified and stored initially in stainless, it had aged in Slavonian oak and chestnut. I had a small plate of salumi and cheese. Very nice. 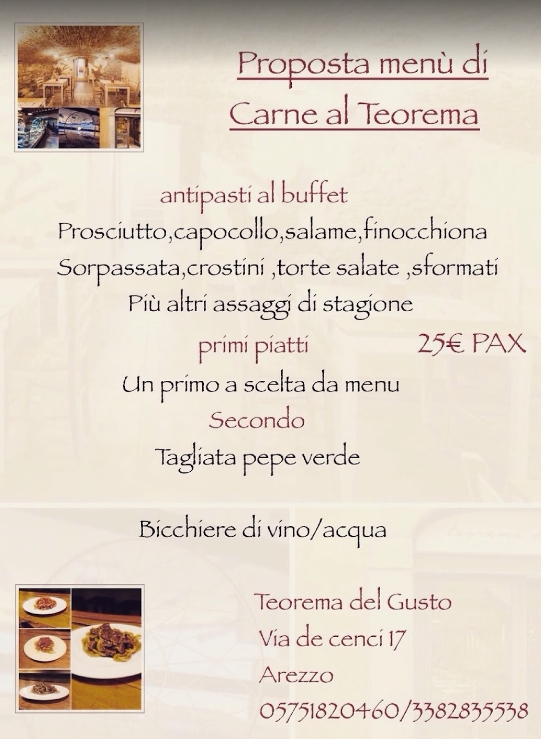 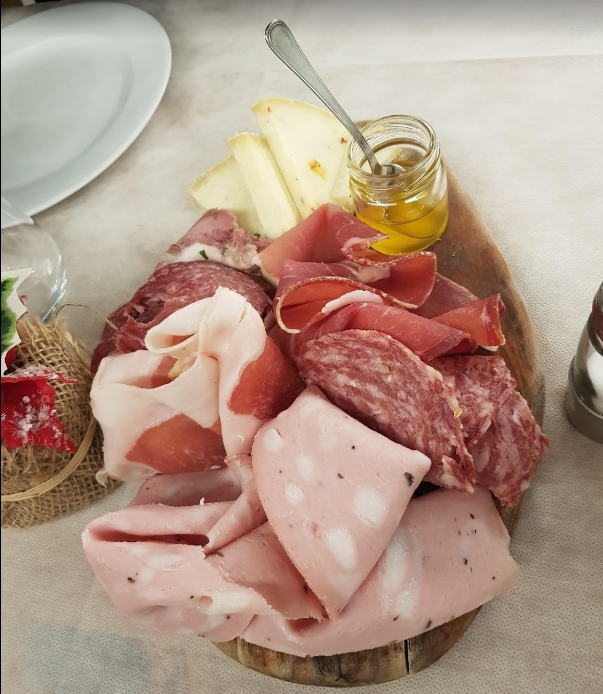 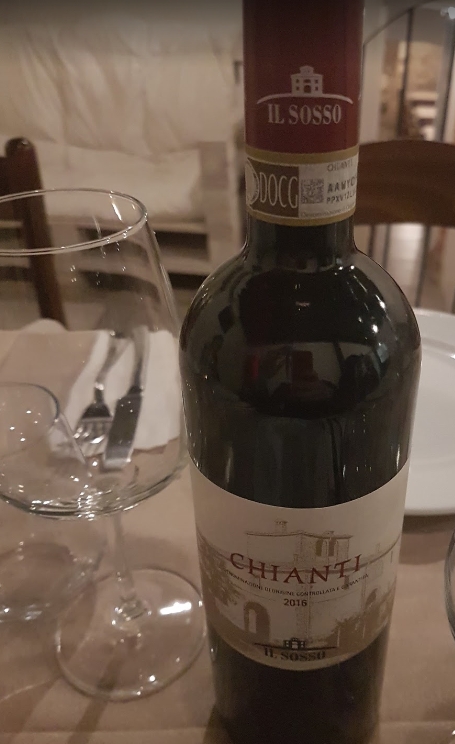 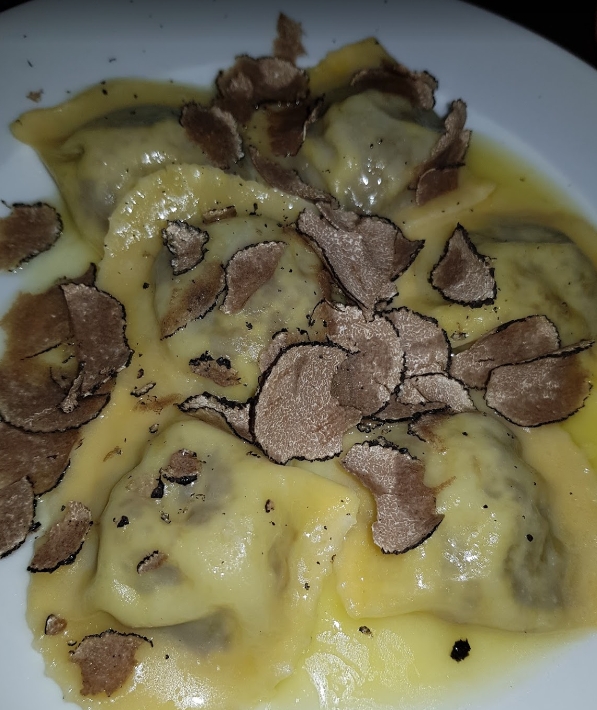 Practically across the street was Teorema del Gusto, a trattoria. Welcomed in, the hostess asked if I would like to dine in the cave or upstairs. They have a lower level, brightly lit with tables spaced well, and it seemed a great solution. Prix fixe dinner too, and good price. Antipasti to start, a choice of primi from the menu – I chose freshly homemade ravioli with a lemon cream sauce and shaved truffles (upgrade) – and pepper steak for my main. A chianti to drink and I’m fat, dumb, and happy. None of the desserts screamed to be eaten, as they were mainly tortes, pies or cheesecake, and I was pretty near full anyway.

Across the street was emptying, so I checked to see if Gino might have a local digestif I might try. Smiling, he reached under the counter and put an unlabeled bottle on the bar. It was his own wild fennel liqueur, and he offered me a taste. Wow! I’m hooked. I would have to try to grow this (cultivated fennel) in the cooler winter season in Florida. Plus fennel is a host plant for black swallowtails. And, yes, he did share some more with me.

Smiling broadly, I walked back down the street to the hotel. Up to the room, I began the posting write-up, downloaded pictures, set stuff to charge. It’s supposed to rain late tonight, so I needed to prepare for that eventuality for tomorrow morning.