Tonight in Pisa. However, I made a stop in Massa before heading to thecity with the leaning tower. Actually, I had hoped to find a temporary storage place in Massa, but none practical surfaced. So I brought the roller down and stored it with the front desk in La Spezia, and caught the 8:20 train to Massa.

The Massa Centro station is hardly “central” to the center city of #Massa. It’s about 1.1 kilometers along the Viale Stazione which runs straight from the train station to the city line. And then at the rotary and the beginning of the commercial district almost another kilometer to reach the Basilica Cattedrale di San Pietro Apostolo e San Francesco d’Assisi. 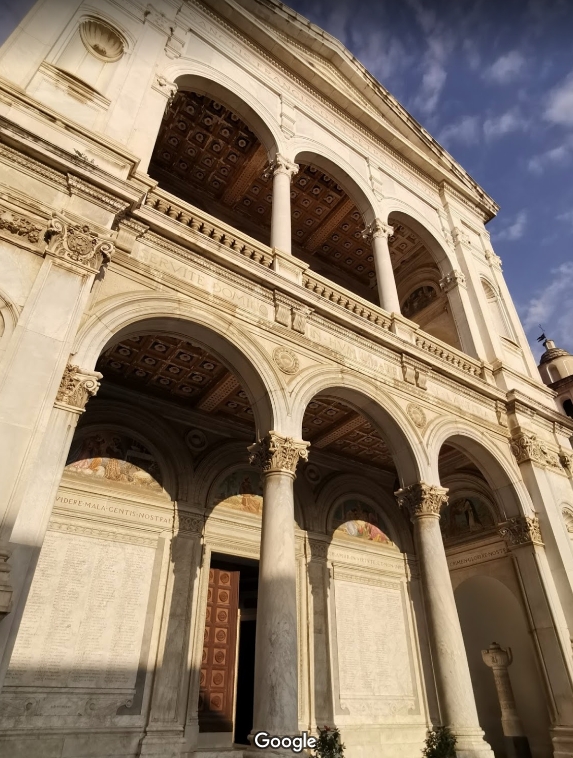 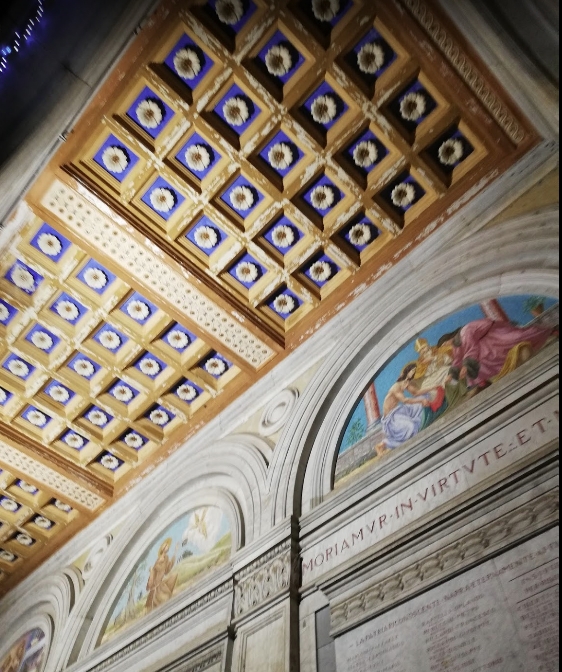 Coming up Via Dante Aligheri you are heading straight up a slight incline to the cathedral entrance. Fourteen steps up from the sidewalk, nearly a building story, brings you to the double portico porch on the center plaza. The ceiling of both levels is coffered. Behind the abutting buildings, on the north side is a small cloister sharing the north transept’s west wall. A bell tower is located on the north side adjacent to the presbytery. 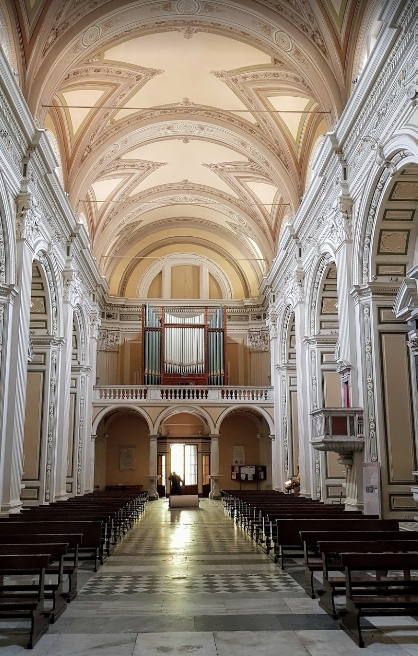 Entry is through the central double door. The organ loft backs to the west wall over these doors. Heavy square-based columns raise to the vault, with intricate plasterwork. The side niches are not deep, and large oil paintings in elaborate frames and marble columns line the walls The high altar is set back in the apse under a half dome of frescoed stencil. The main altar sits in front, raised two steps from the nave floor, with the bishop’s throne, a simple red armchair to the south. The baptistry is in the south transept, a large carved marble bowl.

Leaving, I headed to the Chiesa di San Sebastino, which some residents call a cathedral. A large modern structure, there is a round lantern over the center of the church floor. Completed in 1969, it has been called brilliant and a horror. The acoustics must be good, as there were brass players rehearsing with the organist while I was there. (I was asked not to take pictures inside during the rehearsal.) Bright and airy, it is a parish church. I didn’t understand the cathedral label.

Heading back to the station, I contemplated finding an alternate route, as there had been little of interest along my path. Once I got to the rotary, I spotted an approaching bus with Stazione as its destination, so I hopped on, getting a free ride with my senior age. A train was due in 18 minutes, so I positioned myself on the platform and boarded the 11:44 train.

Back in #LaSpezia, I returned for my bag. My turnaround allowance was an hour, so I stopped in the Chinese restaurant Ni Hao on my way to the station.

Menu in Italian and English, with primi and secondi platters, and some interesting variations. For example, pork fried rice was “Spaghetti di soia con maiale e salsa picante (Soya noodles with pork and spicy sauce)”. Secondi didn’t come with rice, so the chicken with pepperoni was actually with bell peppers. Quick, decent, and I got to the 13:19 train easily. I pulled out my journal and started recording notes and observations, while keeping an eye out the window.

By 14:30 I was at the Pisa Centrale station. There were lifts to the subway. Out the door and heading north, initially dodging cyclists as I crossed the Piazza della Stazione. Continuing north to just beyond a rotary, I followed the roadway around the Monumento a Vittorio Emanuele II in a large oval park.

I was on the west side near an abbey, rather than the east where there was a carousel. Five roads into the oval around the park (interesting traffic flow, as it is more eye-shaped, and vehicles had to exit east and west rather than continuing around), I took the one at 11 o’clock, Via Massimo D’Azeglio to a park, which I passed along, and followed north, then past three buildings to my hotel. Google’s 8 minutes were my 15, but less than 2/3rd of a kilometer. The weather here was similar to what I’d been experiencing, partly cloudy and comfortable temperatures, although it was a little cooler in #Pisa.

The Hotel Bologna reception was efficient and ready for me, sending me to the middle of their three levels of rooms. Big bed, nice bathroom, and sufficient floorspace to open the bag. All my requirements, and a lift too. I kept my lighter jacket on.

To get to the cathedral, I needed to cross the Arno River, using the Ponte Solferino, pretty much due west. The river is channeled, with a vegetation hedge between the slowly flowing water and the running/walking path along the embankment walls. The Via Roma led me north, past the Botanical Gardens and University to the huge Piazza del Duomo and Piazza dei Miracoli.

Where Via Roma ended, ahead was the south transept of the cathedral, to the right was the fountain of the putti and that famous leaning tower, the free-standing cathedral campanile, and to the left the circular Battistero di San Giovanni. 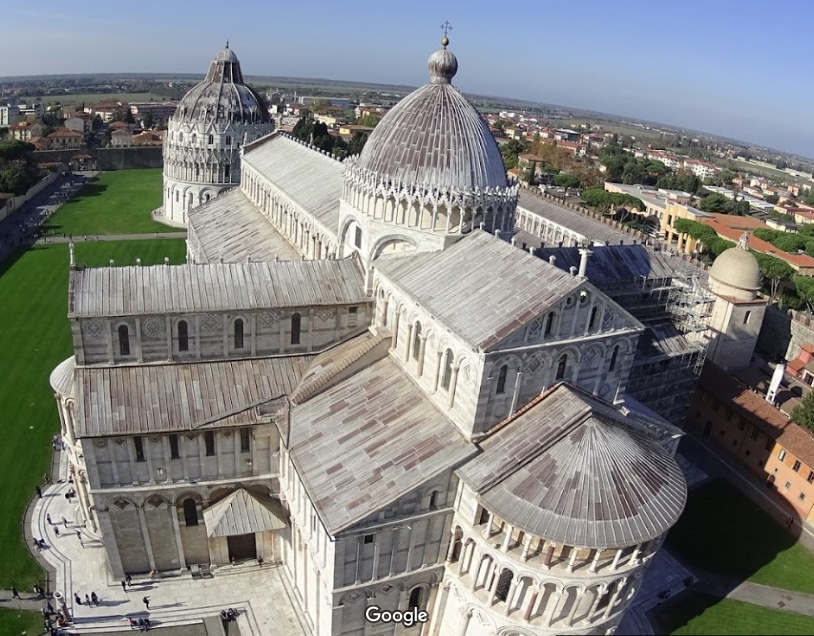 Walking between the Torre di Pisa and the cathedral, I rounded the apse to turn between the narrow space between the Palazzo d’Opera and the cathedral transept. Passing between the walls to a cloistered cemetery and the nave end of Cattedrale Metropolitana Primaziale di Santa Maria Assunta, I soon stood in front of the primary entrance. In the mid-afternoon light, before the shadow of the baptistry rolls across the façade, the white marble glistens. The solid arches, the odd ones of the seven on the plaza level, include blocks that appear as red and blue. Three tall doors fill the other three arches, with entry from either side. Considered Pisan Romanesque in style, the exterior is just beautiful. The four levels of loggias on the western façade elongate its height. 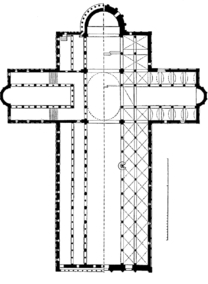 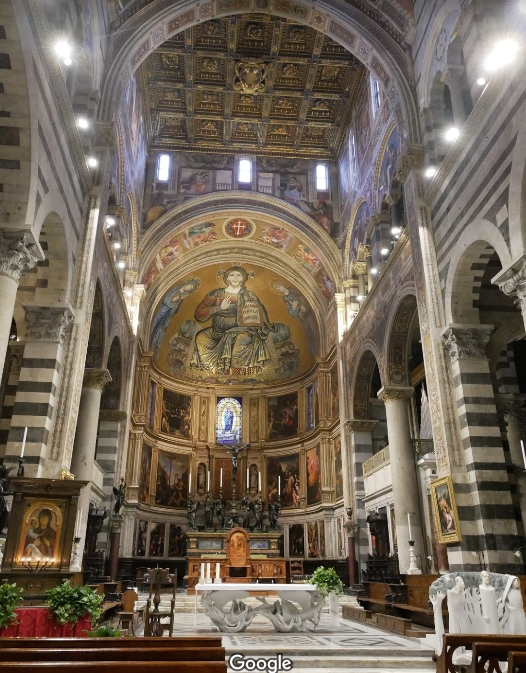 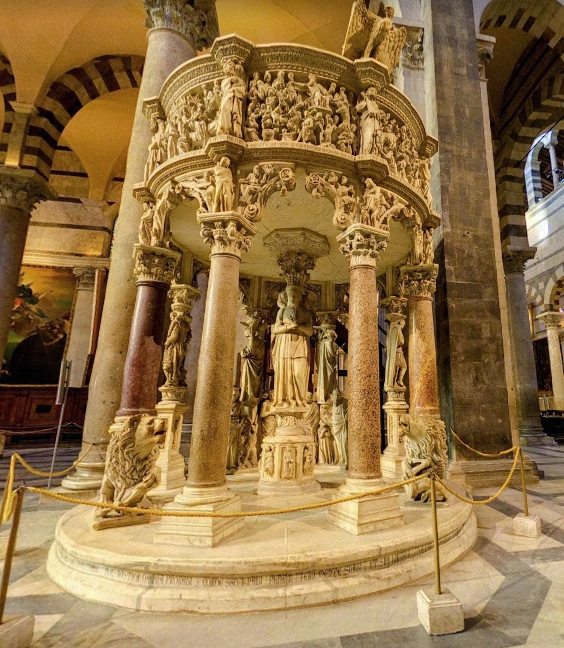 Entering the cathedral from the south side door, I was looking down a double aisle on the right side of the central nave aisle. Sunlight coming in through the west end and south balcony clerestory windows gave the whole nave a golden glow. Large oil paintings covered the interior walls, while ornate shrines might fill in spaces between them. Walking down to the crossing, pews were set from the start of the nave to the steps up to the presbytery, and these and the path between were roped off, which included access to the ambulatory.

Across the nave was the Pisano pulpit, glowing gold in the light, albeit carved from white marble. The south transept, which glowed blue, seemed to be reserved for burials – there were sarcophagi on the marble floor and one was in a place of veneration at the altar.

Leaving, I visited the baptistry. At 53m tall and 34m in diameter, it is the largest baptistry in Italy. Constructed in the early thirteenth century, the lower section is Romanesque while the upper is Gothic. Fairly unadorned, there is a strong sense of space here. Acoustics would be miserable.

Having a Pisa “Building Pass” and knowing all historic and church buildings in Pisa are open until 8pm, my next choice was obvious. I joined the queue to climb the campanile. 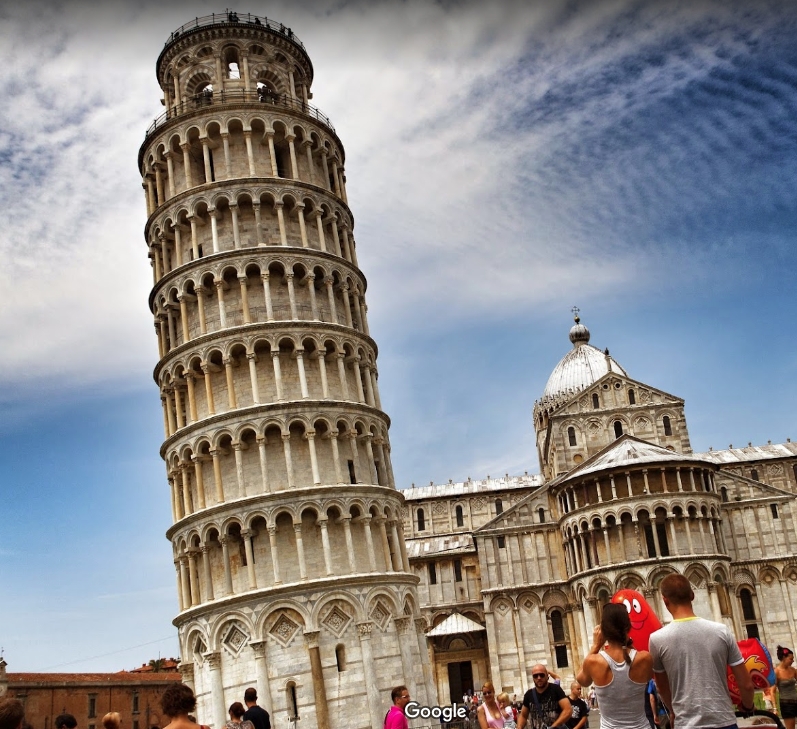 Two hundred ninety-three steps to climb 56m and I got some great aerial views of the cathedral and baptistry, as well as adding the third oldest building on the piazza to my list. Probably the most frequently selfie-included object, it was nearly impossible to avoid being photobombed. It was also so humorous watching tourists trying to line up to appear to support the Leaning Tower of Pisa.

The Duomo Vecchio, or old cathedral, is the Chiesa San Paolo a Ripa d'Arno. Gcatholic.org no longer lists this attribution, but it proved worth making the visit. Building may have started in 925, a church on the spot existed in 1032, and the Duomo built outside the walls started in 1063, so it’s possible. It is considered (per Wikipedia) to be a preeminent example of Romanesque Tuscan architecture. It’s a small simple parish church, with some very old frescoes. The tile and engravings on the exterior are noteworthy. Around in the back is an octagonal chapel to St Agatha, a post war restoration and relocation.

There were any number of more churches near the Arno, but it was cocktail time. A quick check of the phone and all the recommended watering holes were beyond my hotel. Not needing a stop, I headed to Masoch & De Sade.

Pulling up the end stool at the bar, I inquired about local wines. Now, I am in Tuscany, one of the premier growing regions of Italian wine. Being further east, there’s a DOCG Chianti delle Colline Pisane that has red blends of Sangiovese, Canaiolo Nero, Trebbiano Toscano and Malvasia del Chianti. I was game for any. The gal at the bar checked with the guy in the kitchen, and came out to pour one of her “local wines” that were served by the glass. Since marzolino is the local cheese, I asked if I could get a small plate with it and some salami. Much easier, I was set to go. I pulled out my journal, adding updates on Pisa. Getting a glass of water, I finished up and decided to drop stuff at the hotel.

From the pub to the hotel was 5 minutes. I greeted the front desk, and climbed the stairs. In the room, I started charging a camera battery, and opened the roller. Toiletries to the bathroom, I gave my face a good scrubbing. Swapping to the heavier weight jacket as it was getting cooler outside, I headed back downstairs with my phone showing restaurants. Checking with the bellhop who wasn’t busy, he recommended Ristorante ToraTora, because the folks were local and got fresh produce, fish and meat. As it was Friday, he called to see if I could get a table, and said I would be set for 30 minutes from now. I walked over on a roundabout path, scoping the neighborhood, and was very surprised at the size of the Friday night crowd outside at the restaurant. 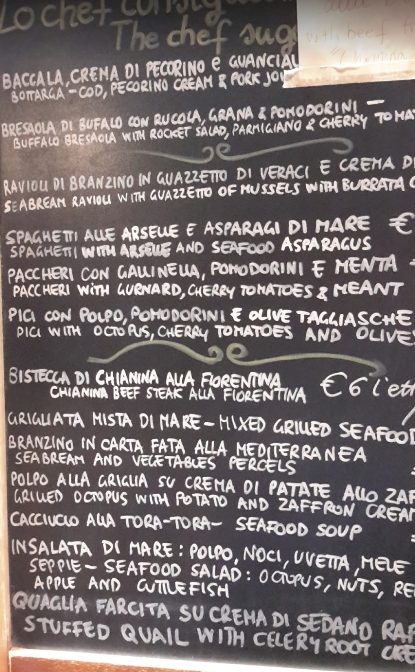 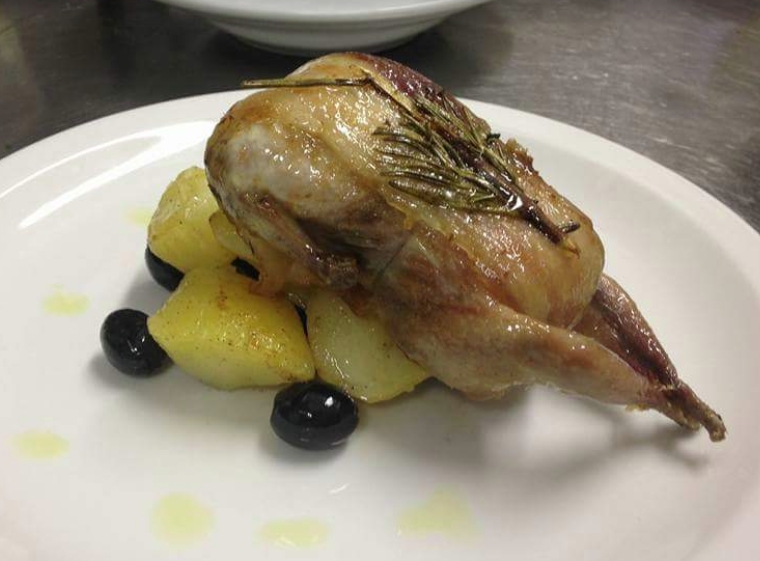 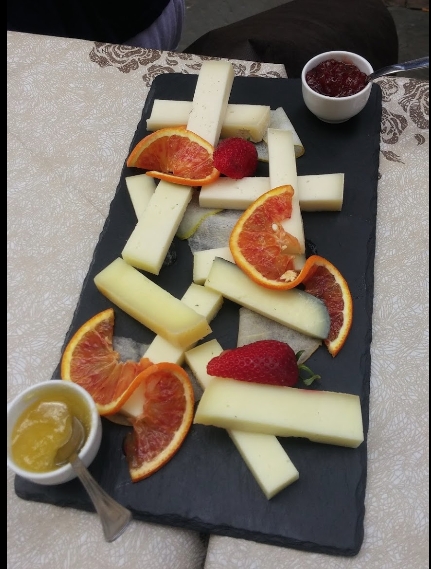 With a 10-minute wait to clear the table, I was shown back into a side room near the WC, but bright with good lighting. The menu of the day was on a chalk board, and included English, so it was easy. Ravioli di Branzino in Guazzetto di Veraci e crema di burrata as a first course, with a bottle of Bianco Pisano di San Torpé. Pretty mussel shells, a yummy ravioli, and the tail off the crawfish, all went well with my dry white blend of trebbiano and canaiolo bianco. With a small break, the quaglia farcita su crema di sedano radice arrived. Yes, a quail is a small bird, and that little guy, sitting on potatoes with olives meant I’d be playing with my food. (That’s why usually get boneless food that doesn’t require work to eat.)

They do a cheese plate, with three type of local cheese. Of course, it wasn’t written down, so it didn’t make the journal, which means it won’t make the blog. Served with blood orange slices, strawberries and two chutney-like sauces, I still needed my bread, but they were happy to accommodate.

Dessert: the choices were gelato, custard, two kinds of chocolate and a fresh pear torte. I went for the tart, as I don’t see pear offered often, and it was divine. With delicious vanilla ice cream.

Dinner was a success, and I had my phone to get me back to the hotel. I stopped at the bar and picked up a Tuaca, a Tuscan brandy that has touches of citrus and vanilla. I brought it upstairs, and, with my shoes off, I composed this blog posting. Reversing the 15-minute walk from the station tomorrow will be easy, and my train to Florence leaves a bit after 9.