An early start to the day, as I had to get from Rimini to #Bologna by train, and of the two morning departures, the second wouldn’t get me there for a scheduled walking tour. So that meant being on the platform for a 7:58 departure. Fortunately, the hotel in Rimini was really close, so I was up and out in half an hour, and checking the departures board by 7:45. Unfortunately, the platform was in the middle, so I had to get my bag down and up the stairs, but it happened and I was at Bologna Centrale in 90 minutes.

Elevators up from the platform to cross into the terminal! And the Hotel Donatello was just down the street 3 blocks on one side, a park on the other, all of 650m and 10 minutes. With three stars and three floors of rooms, this hotel on the corner has a lift and I was happy. Tuesday morning at 9:45 though, the room wasn’t ready, but I checked in and left the blue roller.

Back in December I thought I’d signed up for free walking tours to begin at 11 and 6pm. With no confirmation, I checked the website, and the earlier (free tour) runs only Thursday through Sunday, the evening is a food tour and done by reservation with a minimum of 2. I did have a private walking tour scheduled for 3 hours to start at 3. So now I had the time from 10 to 3 open. I’d read my PDF from the NYTimes story about 36-hours in Bologna on the train. Ah, the confusion of not updating your itinerary as you modify and adapt. 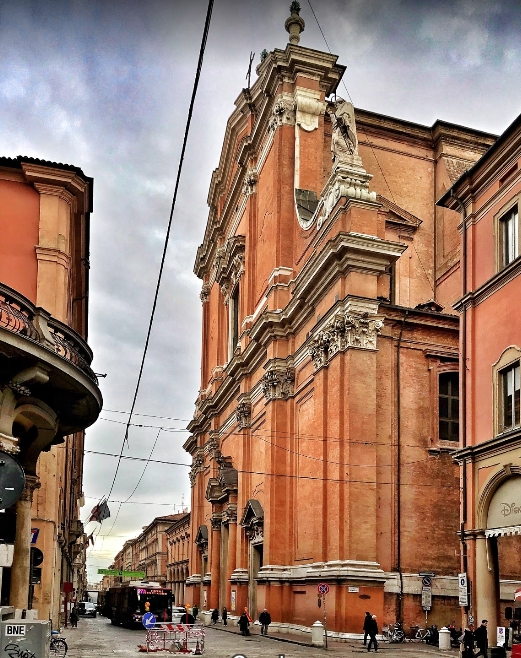 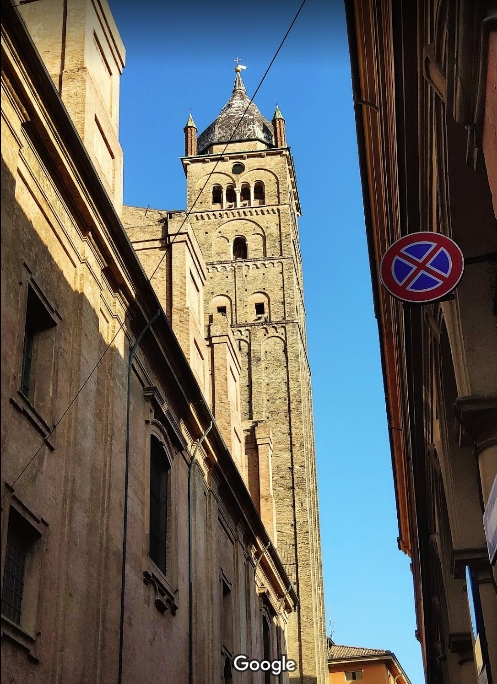 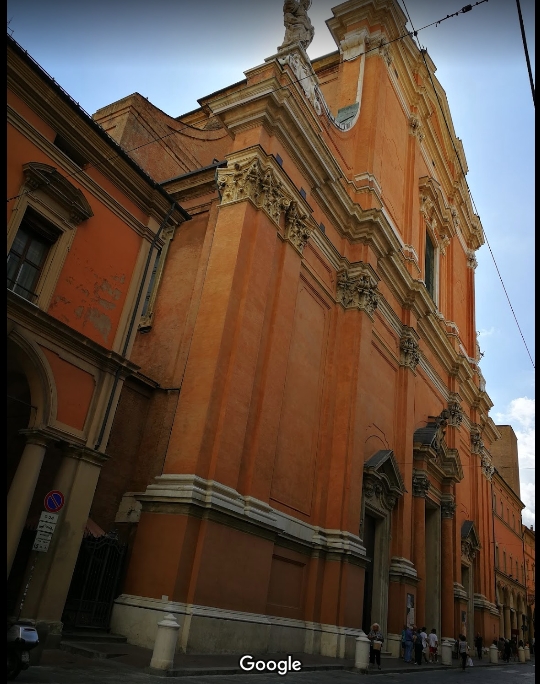 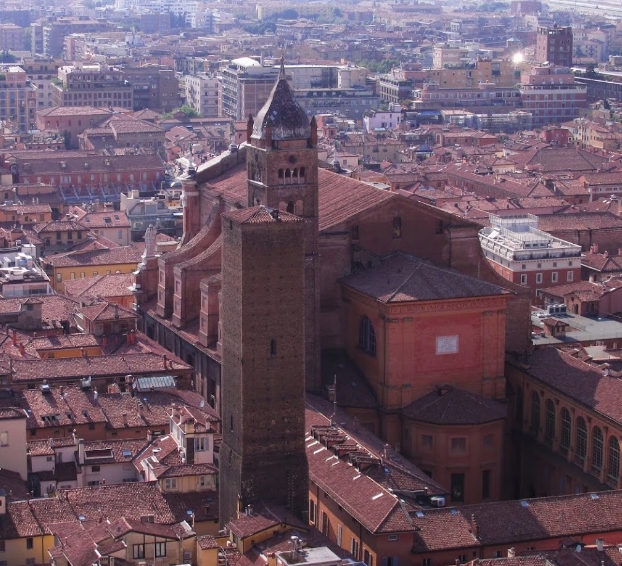 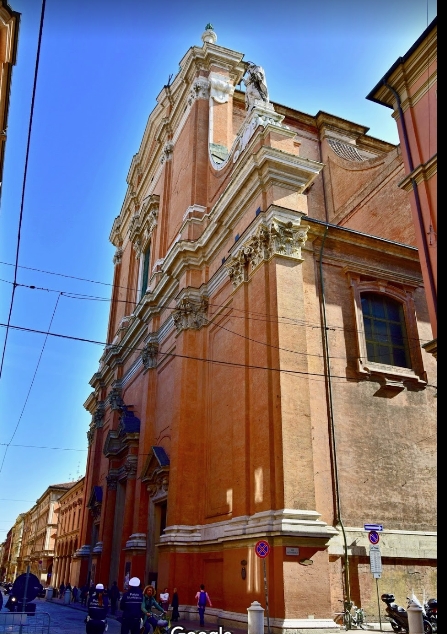 Left with 5 hours to fill, I of course started at the cathedral. Cattedrale Metroplitana di San Pietro Apostolo is the seat of the Cardinal Archbishop Zuppi. Tightly surrounded by commercial buildings, the Via Indipendenza in front of the possibly 30-meter tall western façade is probably 3-4 car widths, plus sidewalks. From the street, it’s a hard church to photograph. The Baroque interior is very ornate, with thick square columns supporting arches separating the nave from the chapels that fill the side aisles. 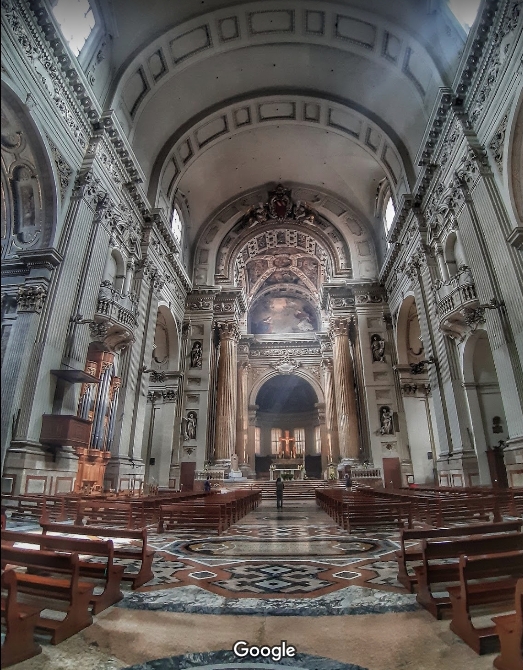 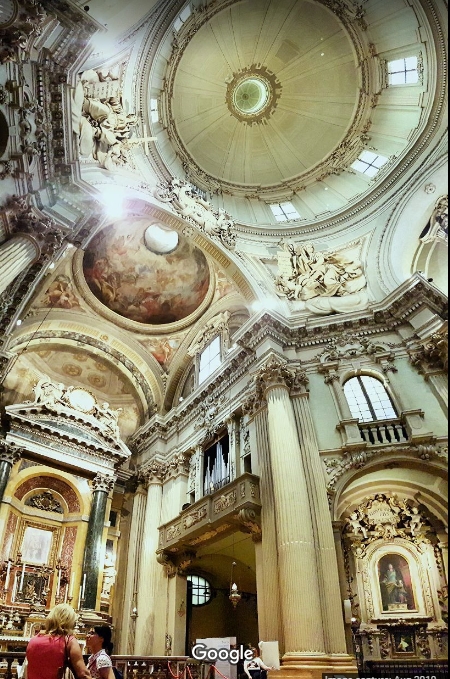 The presbytery, or Cappella Maggiore, is up 9 steps with a main altar and cedarwood painted crucifix. Carved wooden seating (choir, chapter?) follow the curve of the apse. The cathedra is on this raised level, off to the left of the altar table; it looks to be of stone and particularly uncomfortable to use. The frescoes in the barrel ceiling vaults are magnificent.

I was able to climb the bell tower / campanile, which gives a view of the tiled peaked roof, and semblances of buttresses. The largest bell is 3300kg and is known as La Nonna (grandmother.)

Gcatholic.org lists 11 basilicas within a kilometer of the cathedral. My 3pm tour with Fabio would assume I’d seen at least half of them. Not having an order, I picked the Basilica di San Francesco first. Due west a half mile, I was there in 15 minutes as I weaved through lunchtime crowds.

Google says French Gothic from 1265, the entry faces west, has little ornamentation except the porch over the central entry doors. The presbytery is in a half-circular apse with an ambulatory, and the high altar includes an elaborate reredos. The nave, arches and aisles are highlighted in red brick, with white plaster walls.

To the southeast was the Basilica di San Paulo Maggiore. An early 17th century church, the Gothic interior belies the more Baroque red stone and brick exterior. The frescoes on the vault and dome, and in the sacristy and apse are almost overwhelmed by the carving and plasterwork. A baldacchino stands over the carved marble altar containing a sculptural depiction of the beheading of St Paul.

On to the Basilica di San Domenico. Built in the thirteenth century to house the remains of the Castilian priest Dominic of Guzman who founded the Order of Preachers. A very large church and well-endowed, it has an extensive library of works pertaining to the Dominican Order. [I seem to remember a basilica in Toulouse which claimed to have the remains of St Dominic, the creator of the Inquisition.] The sculpted ark contains his remains; Michelangelo, Pisano and Lombardi contributed. Paintings and frescoes are spaced strategically throughout the structure. The Renaissance carved choir seating in the apse is by Fra’ Damiano da Bergamo.

Continuing my arc around the cathedral, I moved on to the Basilica di Santo Stefano. A complex of 7 churches, built between the sixth and thirteenth centuries by St Petronius, who desired to replicate the holy sites of Jerusalem. I visited 4, perfunctorily.

With enough time for one more, I picked the one closer to my rendezvous point. The Basilica di San Petronio is a large church with an unfinished marble and brick façade in the early Italian Gothic style. There are 22 chapels, all with significant art. The nave itself, however, is fairly clean of design, with wide aisles and well-spaced columns. A tourist attraction, I would duck in and out of chapels based on how large the crowd inside was.

Leaving, I was already at the Piazza Maggiore just ahead of Fabio. He had texted me that he was on his way, and all I had to do was walk down the steps from the church onto the stone tiles. I texted back that I’d stand on the steps by the westernmost door, and within minutes this cherub-like young man was asking if I was Signore Cook. An enterprising guide, Fabio had his own site and arranges for half and full day escorted tours in Emilia Romagna. I told him of my visits to the 6 churches, and plotted our steps to see Bologna as a native.

Our first stop would be the Archiginnasio Palace, the first campus building of the University. Crossing back in front of the basilica, which Fabio told me was originally planned to be large than St Peter’s in Rome, we turned to walk along its eastern wall to reach the Piazza Galvani. The Palace houses a library, lecture halls, an anatomy theater and exhibit rooms.

We circled around the Archiginnasio, walking past shops to take an alley past the Torre Toschi (brick tower set in the middle of a shopping mall) on our way to the Mercato di Mezzo. Yes, a marketplace. 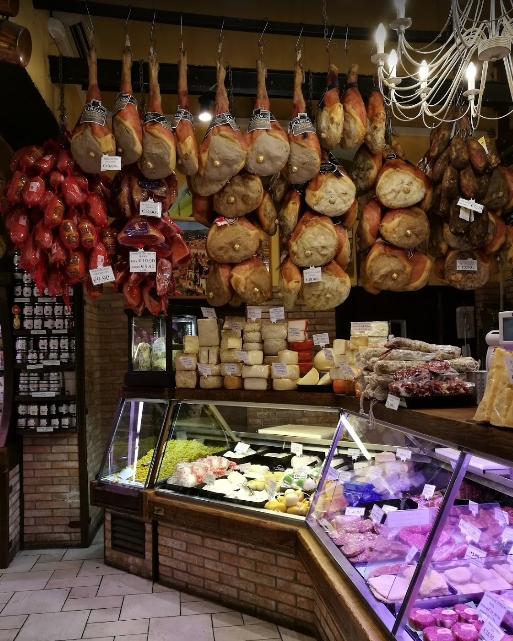 I love wandering around the vendors’ stalls, looking at all sorts of products and people watching. Fabio probably figured that I’d skipped lunch based on my church visits, so he had an ulterior motive. I did grab a piadini with some Parma ham and Parmigiano Reggiano. Yup, seventh heaven. All I needed was a glass of wine, but I didn’t find that vendor. We got bottles of water and forged onward.

Practically around the corner, a church which wouldn’t have been on my list (but should have been) was our next stop. Santuario di Santa Maria della Vita is an elaborate domed Gothic church with historic murals and sculptures. This is the church of the Battuti brotherhood, an inspiration for Dan Brown’s book The Da Vinci Code. The terracotta group Mourning over the dead Christ by Niccolò dell’Arca, plus another collection were stunning.

Our next destination was the Piazza di Porta Ravegnana, the area of the Two Towers. One thousand years old, the Asinelli and Garisenda Towers are the distinctive landmarks for the city of Bologna. We went past the market, went left a block, then right and left again. At the towers, the interior stone work was amazing.

This maze of streets hints back to when this was the Jewish ghetto. Signs on the buildings indicated various former structures in the enclave. I didn’t see any of the brass markers that I’ve found in many European cities memorializing Holocaust victims.

Walking down Via Zamboni, I chuckled, and then explained about ice hockey rinks, a connection that is purely North American, I believe. Fabio promised to include it in his repertoire when he next had someone from across the pond. We passed another of “my basilicas”, San Giacomo Maggiore, on our way to the Oratory of Santa Cecilia.

He offered for me to take a quick look, but I was close to being “churched-out”. Known as the Bologna Sistine Chapel, artists from both Renaissance Ferrara and Bologna had decorated the walls.

Fabio began telling me about the historic Bologna as we headed to our final stop. Apparently, Bologna, despite being significantly inland, had a series of canals throughout the city, linked to the Adriatic near Ravenna.

There had been enough waterways to rival Venice and Amsterdam. What remains today are two perpendicular strips of water, not connected. As it turned out, they were within 2 blocks of my hotel, so I invited him for a drink, either there or someplace close by. Impero was nearby, with outside tables. We settled in, with Fabio ordering a Biolca, a golden ale (bottle) from Vecchia Orsa. Explaining my preferences, he ordered a Spaccamaroni, a red ale, from the same producer for me. I ordered a plate of antipasto, and we sat and talked. He’s 30, which surprised me as I thought he was barely in college. His girlfriend is 4 months pregnant, but was working this evening, so he didn’t have to rush back to their flat. He free lances in technology and has his tour business, bolognawalkingtour.com, which has kept him busy and his language skills sharp.

As we finished, he headed off, and I went around a corner or two and got to the hotel. I collected my key and roller, taking the lift to the top floor. I tipped out the widow to let in air, unzipped the bag into a corner and starting charging equipment. For the next hour I wrote I my journal. Checking email and then grabbing my light jacket, I headed out to my dinner reservation. Elisa had suggested Trattoria La Montanara, which turned out to be 3 blocks away, and known for home-style cooking. And it backed onto one of the canals! 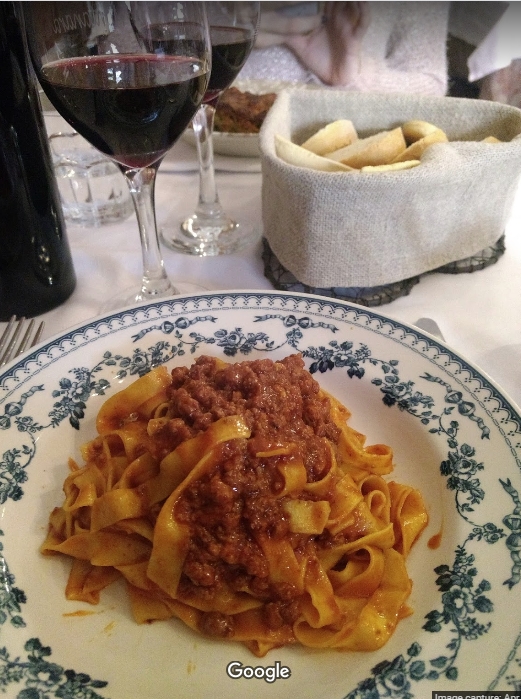 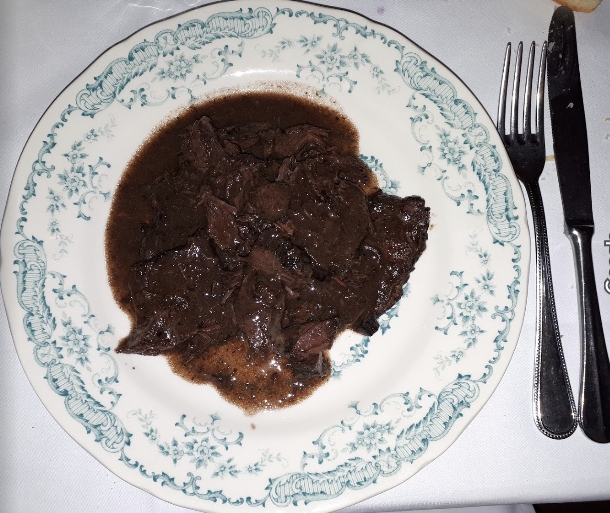 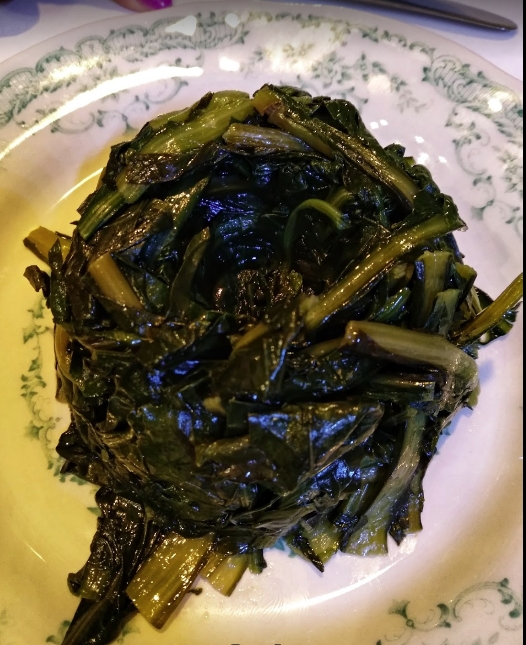 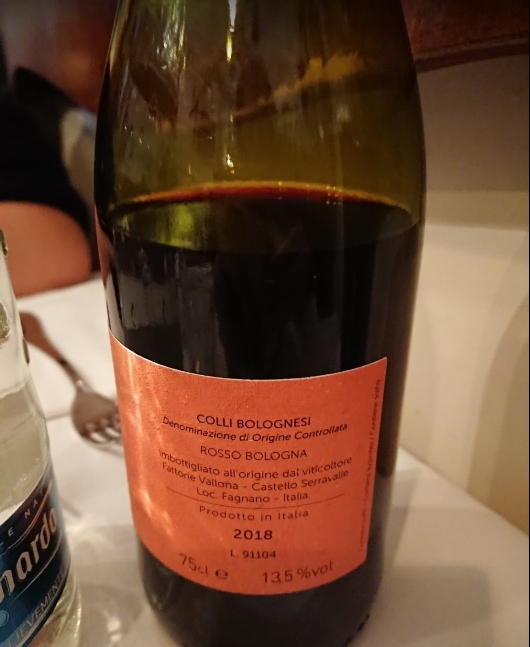 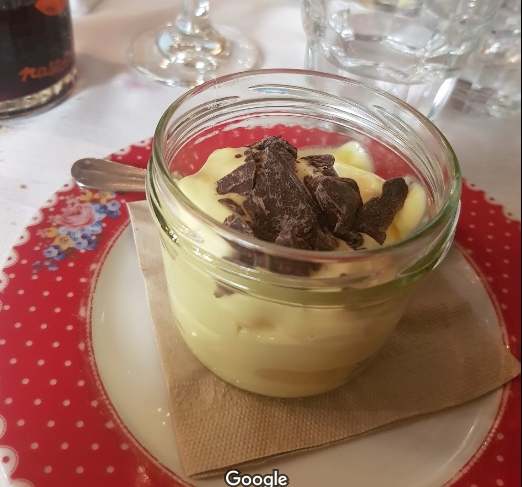 They put me in the single table tucked into the front corner, under a spotlight. I’d already had an antipasto, so it was easy to opt out. Now, I’m in Bologna. I need to have something Bolognese. So I pretty much have to have Tagliatelle alla ragù. Without cheese. Yes, it was tough, but I was able to get through more than half before the waitress, who’d obviously dealt with Americanos before, showed up with a block of parmesan and grated a very small portion. Oh well, I was happy, and it was superb. For a secondi, I took a chance with beef, and ordered the Guancia di manzo brasata in Sangiovese. Probably the best translation would be pot roast in red wine. I was tempted to get the roasted potatoes, but opted for the cicoria saltata, sautéed chickory. Wine to accompany both courses - a Colli Bolognesi. The beef was fork-tender, so flavorful that I melted with it when I put it in my mouth. The greens were a bit different, and I did manage to eat half the portion. Dessert: well, no menu to pick from, just a verbal list. I heard chocolate, so I went with that. A small dish of something way better than vanilla pudding with chunks of chocolate. Small enough to hit the spot, without being overwhelming.

After settling the check, I slowly strolled back to the hotel, feeling content. I got back to the room and began writing on the netbook, and downloaded my camera chip. Tomorrow would be much too busy, with two stops on my way to Parma, but I did have a lunch date with Elisa. So I’ll send this to the cloud and get to sleep.