Today I went into the heartland of Sicily, to the city of Caltanissetta. From Agrigento, the first train at a decent hour left at 12:50, so I slept in until 9. (Last night I had gone back downstairs to Cana Bistrot after pushing my blog post and had a snifter of Russo Siciliano, a 23-year-old “gold” brandy, produced by Distillerie dell’Etna in Santa Venerina, north of Catania. About a VSOP, it was decent and pleasant.) Getting up and ready, I had prepared for a warm day, as the highs of the day were expected to get into the low 80’s with clear skies. Shorts and a lightweight polo, with the jackets and parka tucked into the roller. Sunblock in the rucksack after that initial application, and I was ready to head downstairs to checkout about 10:30. Carmello insisted on giving me a cup of coffee and a couple of rolls, so I sat with him for a bit and we talked about Sicily and where I was off to next. While he didn’t know #Caltanissetta, he gave me a few suggestions for Catania.

After saying goodbye to Marcella, I headed up the stone steps to the “back route” and then rolled down the street into the park. Stopping at Bar Portapó for an early lunch, I had an open-faced pizza burger, and took two small stuffed rolled munchies for the train.

By 12:15 I was back rolling through the park and down Via Roma to the station. A short wait and the train to Caltanissetta Centrale was posted and I headed to the platform. Boarding the second carriage from the front, I pushed my roller into the luggage bin and found a window seat on the left side (north) and pulled out my reader and one of my bottles of water. I checked my notes and this is what I had: “Not to miss in Caltanissetta are the Castle of Pietrarossa; the beautiful Cathedral with its two tall bell towers; the Abbey of Santo Spirito, once a fortified country house transformed into a church by the Normans; and the Church of St. Agatha, its interior richly embellished with polychromatic marble and a Greek-cross floor plan. Finally, three museums take the cake in Caltanissetta: the Diocesan Museum, the Minerology Museum, and the new Regional Archaeological Museum.”

Pulling out on time, we made the 55km run with 6-stops in 90-minutes, right on schedule. End of the line for this train, we came into Platform 1, unloading directly into the station building.

Walking through the building and outside, I was immediately impressed with the size and modernist in front of me. A slight upward grade straight out of the door, I went left when it T’d onto Via Francesco Crispi until it T’d into Corso Victor Emanuele II. Crossing it and two blocks down on the right, I was at the Hotel Plaza, having walked a half kilometer.

At half past two, they were ready for me, and after completing the registration and having a copy of my passport made, I was given a key and sent to the next floor, up a set of stairs with a right angle. The open roller fit between the bed and the window when I moved the small bedside table, so I was happy. The cathedral was closed for about another hour, and was a quarter kilometer away to the east, so I decided to check out the Church of St Agatha off to the north first.

Five blocks up and one block over, I arrived in front of Chiesa di Sant’Agata al Collegio. Situated in the V of an intersection, nubs kept the cars from rolling onto the small plaza in front. Several steps into a gated round patio, which then had opposing paired staircases to get to the entry porch. Two small side doors, but the central door, which was open, had columns and open portico. The more interesting feature was that several areas on all three levels of the façade had what appeared to be plaster over some of the typical gold-beige tufa stone face, which was then painted red. Plaster/stucco coverings on the sides was white. Go figure. 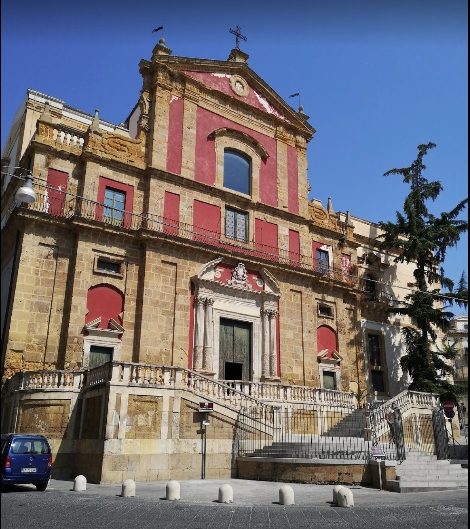 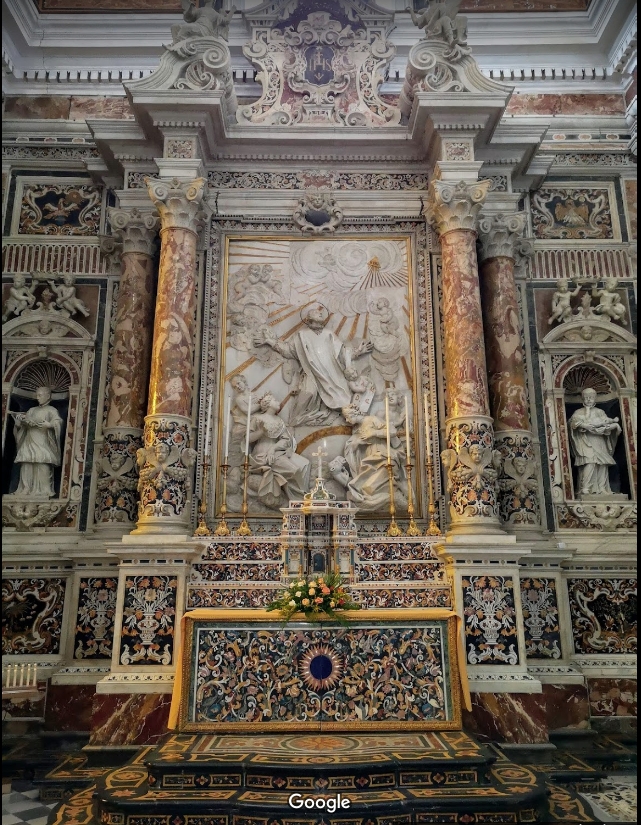 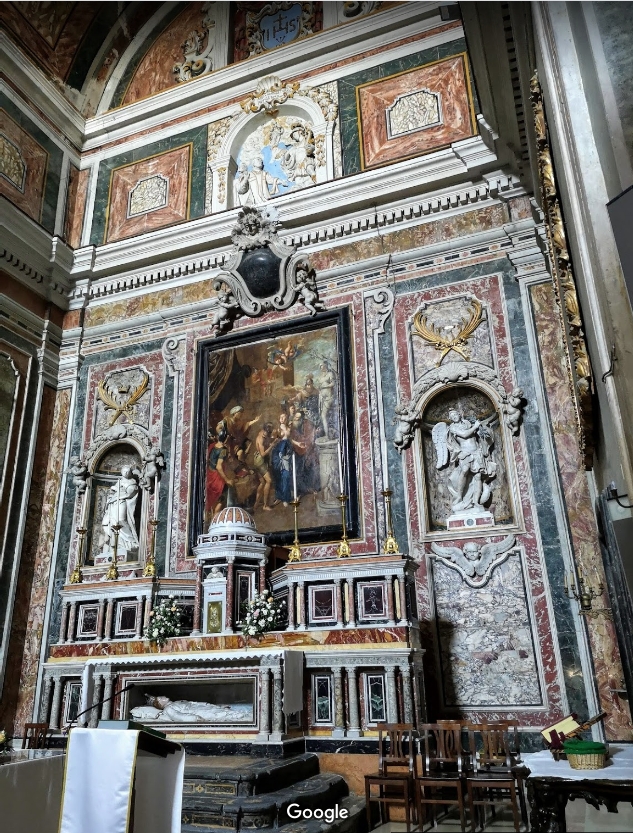 With a façade built in the 18th century, the exterior does not prepare you for the interior. The interior, however, dates to 1610 and I’d guess there are at least a dozen different colors in the marble used to cover most every surface except the frescoed vault. (Some of it is plaster painted to look like marble.) A Greek cross floor plan, the left altar has a retable of St Ignatius, carved by Marabitti; while opposite is the altar to Our Lady of Mt Carmel. Down the aisle from the organ loft over the entry door are the main and high altars in a presbytery set off by a marble altar rail, with a painting of the martyrdom of St Agatha. Beautiful and ornate, the rococo was awe inspiring, and it was probably good that I had a day of looking at two-thousand-year-old ruins yesterday.

Out the door and pretty much straight down the street to the plaza in front of the Cattedrale di Santa Maria La Nova. Its notable feature was immediately evident, the matching dual bell towers on the western façade corners, but the aspect that caught my eye was the robin’s egg blue of the lantern dome over the crossing. Construction was between 1570 and 1622, with interior enhancements, frescoing the nave and vault as well as painting the greater altarpiece happening in 1718-20. The church was elevated to cathedral status in 1844. The US Army bombed the city, damaging the cathedral and other buildings (but not the station, the target,) funding the diocese to complete the church by building an extended barrel apse.

Truly jaded, looking at the western façade really didn’t do anything for me. The street level had two side doors with thin columns and tympanums. The central door was a bit impressive, with the evident stacking stones of the archway, with urns above. The campaniles were nearly identical, with the more northern also including a clock. The upper structure providing a facing for the nave vault was simple. Being able to see the lantern dome, with the ribbing column support carried onto the dome and its crown, made this a more interesting exterior. 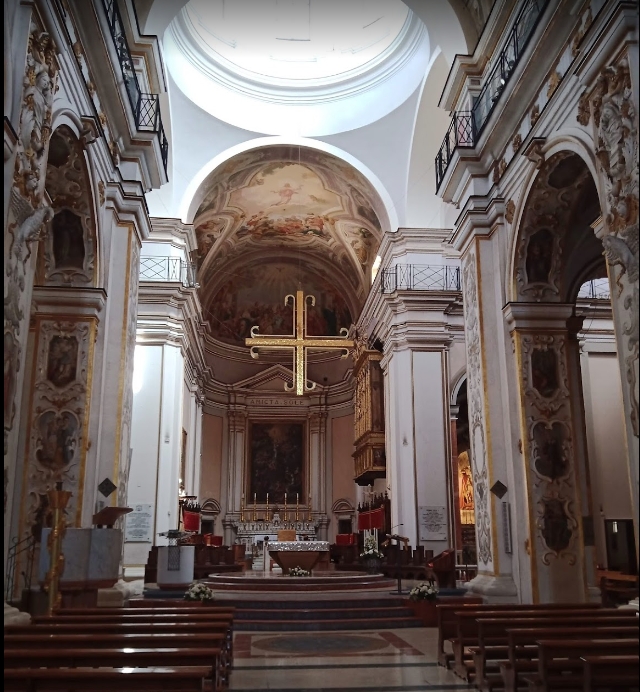 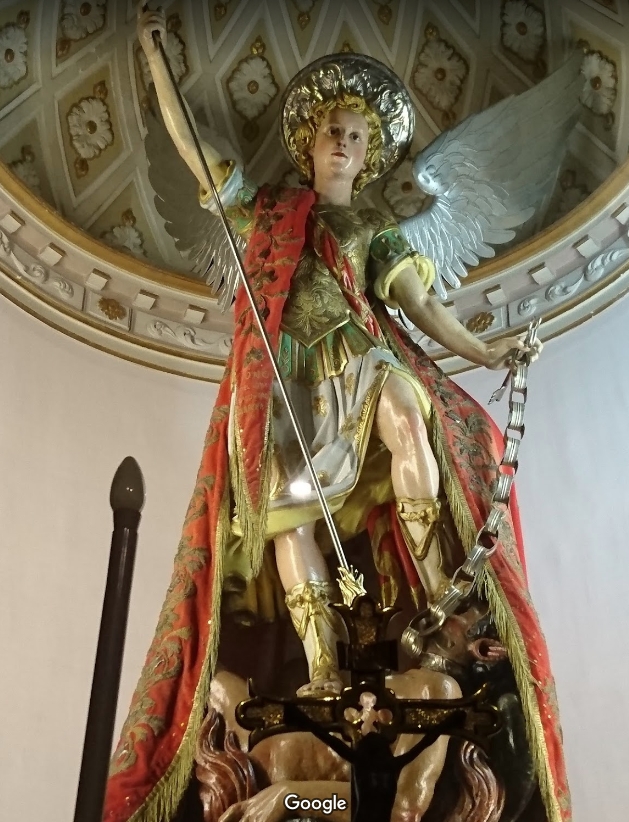 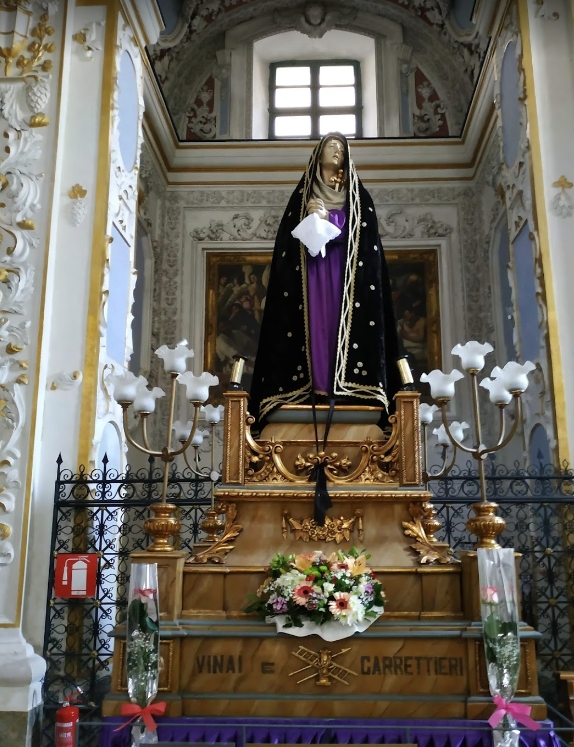 Entering into the nave, the warm cream background used by the Flemish Borremans pere et fils coupled with the wealth of natural light coming from the high aisle and clerestory windows made me feel welcome in the church. Muted shades with old gold to indicate trim continued this feeling as I walked down the north aisle looking at the side chapels. Coming out to the nave at the crossing, the pastels of the fresco on the nave vault felt like springtime. In the center of the crossing, under the unadorned dome, a circular platform hosts the simple main altar. Turning to look at the eastern end of the apse, the cathedra sits at the entrance, with wooden choir stalls, trimmed in red, along the walls to an elaborate high altar. Crossing to the south aisle, the first chapel, guarded by a statue of the city’s patron, Michael the Archangel, is a modern art piece composed of small sections of stained glass and formed into the wall and door to the Eucharistic chapel. 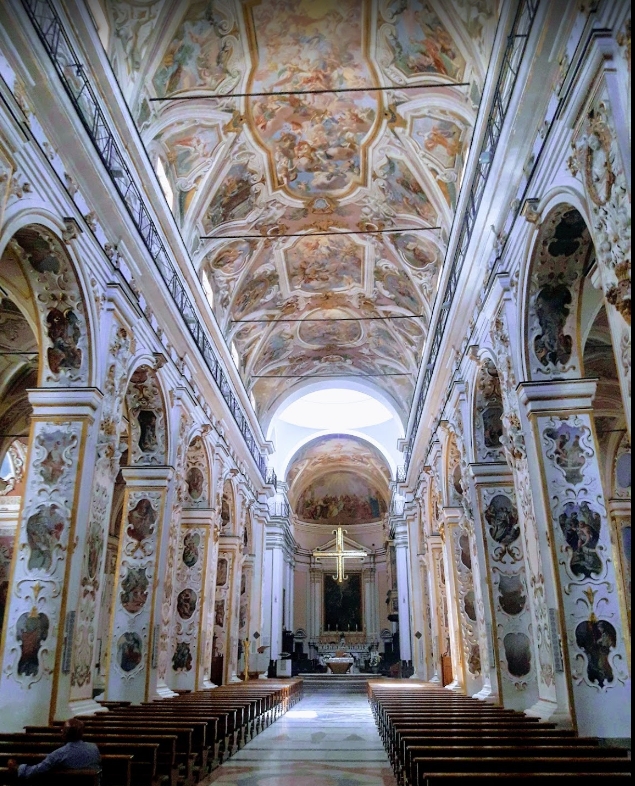 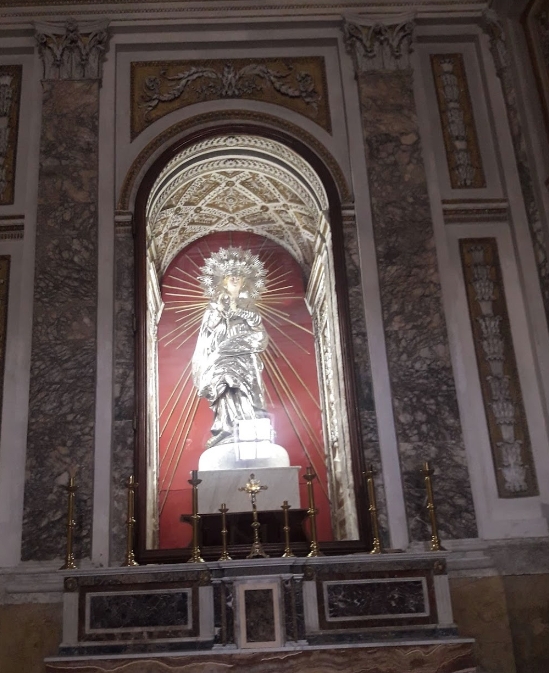 Despite all the baroque flourished and doodahs, I felt good and comfortable in the church. There was an uplifting sense to its ambiance, that there was a welcoming and loving God. Not all churches have this feeling, at least for me, so it was heartwarming to find it in Caltanissetta.

Leaving the cathedral, I also wanted to check out the fountain in front. 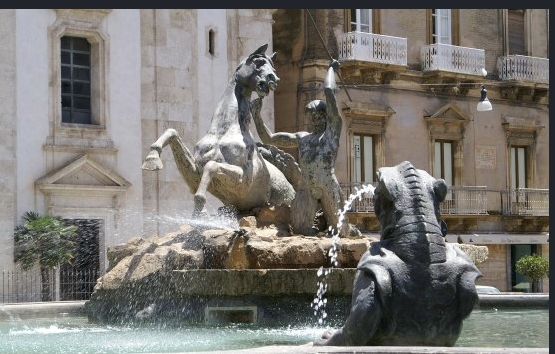 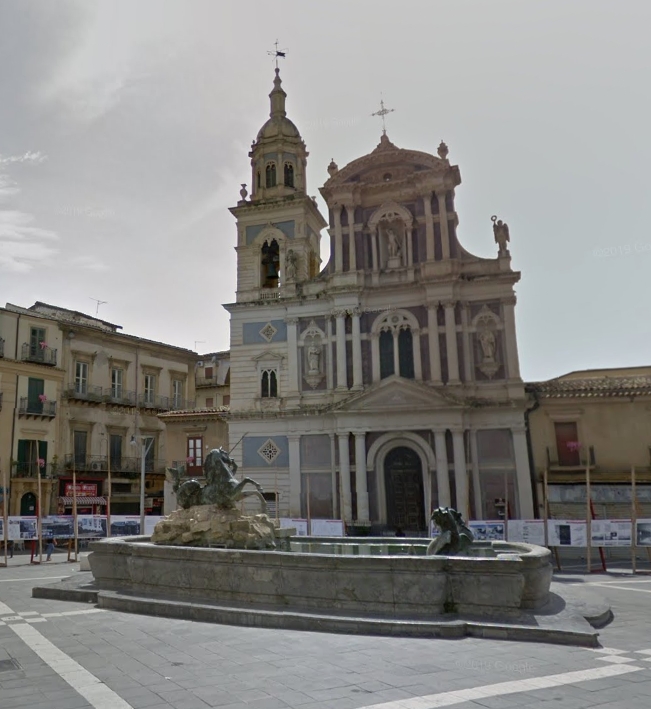 Situated on Giuseppe Garibaldi Plaza, midway from the cathedral and the Church of San Sebastiano, the Triton Fountain depicts a horse tamed by a Triton and threatened by two sea monsters spouting water streams. It had been moved there in 1956 from another palace, and seemed to be a major rendezvous point. And the church was locked.

On the must-see list was the Pietrarossa Castle, and possibly the old St Mary’s church. Both are full ruins, with no entry. The Castle is near the Fort of the Women, a name which in Saracen leant itself to the city’s current name. A kilometer away, well east, it didn’t raise my interest. Across the plaza was the opera house, so I figured I’d go see if I could at least get a peek inside. 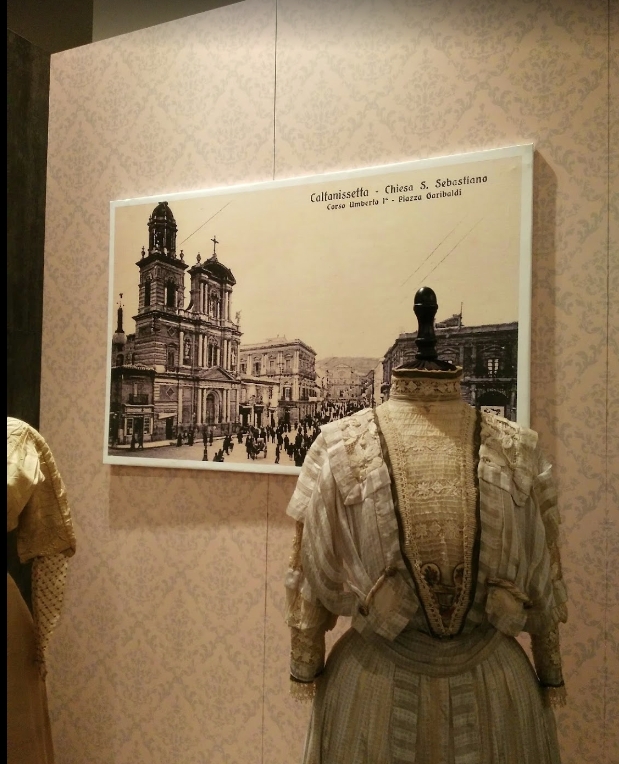 Teatro Regina Margherita is a nice small regional opera house which is used for performances, presentations and discussions. There’s a small museum with programs, costumes and stage props which took 10 minutes, as I closed the doors at 17:30.

While I was heading back to the hotel, I sort of kept an eye out for a pub or bar, to get a little something to tide me over until dinner. No luck, so I headed up to my room and pulled out my journal and spent almost an hour updating for today. All in all, I was unimpressed with the Sicilian hinterlands, as I’d read Caltanissetta described. I then pulled out my netbook and started on the blog post, and got through both the church and the cathedral before I decided I better find dinner.

Per the front desk, there really wasn’t much in the way of fine dining in the old city, and what might be available would be booked as it is Friday. So I asked where they might go if they were on a date, and both said Ristorante 13 Undici. It’s a pizza place, but the food is good and the place is clean. They called and found that I could book a small table, and sent me off.

Set in an alley, it took me a few tries to find, but I got there. For a solo diner, they fold the sides of the pizza in on the sides, forming a partially stuffed pizza in a square format. Pizza is eaten with fork and knife, so this worked fine. I ordered a pie with extra tomato gravy, extra cheese, and bresaola. Oh, and I asked for garlic too, but they said I’d be okay with their gravy. 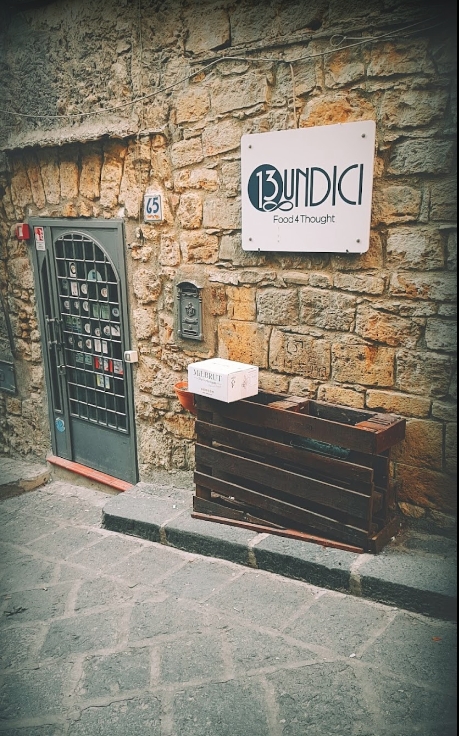 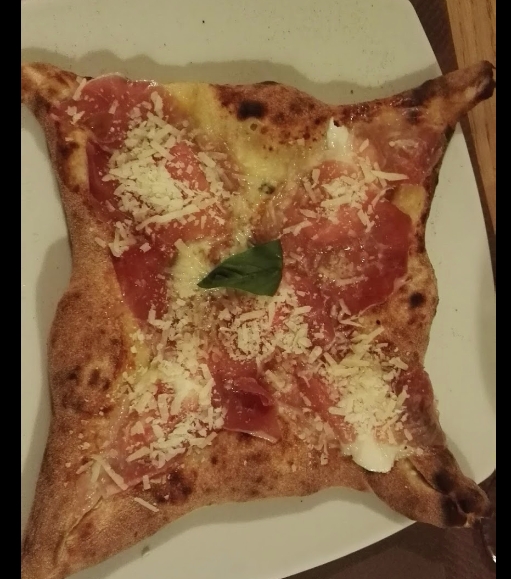 And I couldn’t get a salad – at least I tried, but bufala with balsamic only didn’t cut it. There were two kinds of beer, so I went with a Stromboli. The pie took about 20 minutes, so I enjoyed watching, mostly families with younger kids, as it was just 8pm. I got through about ¾ of the pizza and called it quits. The dessert offering was warm Nutella with walnuts. No thank you. Cheap dinner, I got change back from a €20 note. On the way back, I passed Il Cremino a Strata Foglia, and got a small dark chocolate gelato to go, and had it finished by the time I go the quarter kilometer back to the hotel.

Back in the room, I finished the blog, pulled down pictures, started charging. I’m ready to push this up to the cloud, and will be early to bed, as tomorrow will be a busy day In Catania.