After posting to the blog last night I realized I was halfway through my trip. I looked back at my first weeks in Italy and counted 18 cathedrals that I’d visited. And I wasn’t fatigued from travelling, or hating having a different bed and pillow every night, so I guess I’m doing alright.

When I arrived at the train station here in Rimini, I checked with the bus dispatch about the Monday morning schedule to San Marino. My target was the one departing at 9:25. I planned ahead, and bought my round-trip ticket then. And yesterday, supposedly a calm one, exploded with a great walking tour.

When I got up this morning, I put together my kit for the day and headed towards the train station. With two bus stops outside the station, I needed to be at the FS queue E. I was there at 9:10, and had a dozen in front of me, but another dozen were queued for tickets. At 9:30 we were pushing back, and half an hour later we were at the bus terminal in San Marino. After a short 15-minue walk uphill, I was in the pedestrian zone. Most of my fellow bus riders headed immediately to get the stamp for their passport.

Travelling with them, I was practically at the Basilica Concattedrale di San Marino: off to the east and down a narrow decline. As with most of the mountain top capitol, the basilica and neighboring Church of St Peter are built on a slope. The entry, a neo-classical façade, faces south, with 8 columns supporting a porch. Double height double doors in the center with single doors on either side. On entering, the rear of the church is under an organ loft, with a wall closing off the side aisles. Four altar shrines line the side aisles, which are also closed at the presbytery. A single altar sits before a statue of St Marinus in the apse. Columns line the nave, continuing into the apse. The barrel vault is heavily adorned in plaster carvings. To the west of the altar is the Throne of the Captains-Regent. The cathedra is in the co-cathedral in San Leo.

I then went next door to the Chiesa di San Pietro. Originally built in 600, it was locked and I was unable to see the marble altar, or the “beds” of the Sts Leo and Marinus. So I walked back towards the tourist office, and the queue was gone.

I slipped in, got my stamp in the passport and picked up a hat pin. That made it official – four new countries for this trip added to my life list.

On the other side of the row of buildings was the Palazzo Pubblico, the seat of government for the republic. There’s a great plaza, the Piazza della Libertà, which provides a stunning vista view to the west.

Now the capitol city of San Marino sits on a mountain ridge at the eastern border with Italy, albeit it is a small republic fully contained by Italy. Most of the streets run at a northwest to southeast line, with the governmental and religious seats to the north, while the bus stop was towards the south. Having made the climb to the north, I began walking south, no particular goal in mind. There were a number of fortress towers off to the east, so I figured I’d head there.

From north to south, the first would be the Guaita Tower, which involved climbing stone stairs to get up to a fortress wall with towers and crenellations. There are three castles overlooking the city, and this has the oldest fortification. (The Cesta Tower is higher, and includes a weapons museum. The Montale Tower is smallest, a former jail, and is not open to the public.) After getting a ticket, I made the climb up to the top and walked the walls, enjoying the great views. Well worth the (somewhat arduous) climb. Glad I did it, but it convinced me I didn’t need to climb to the Montale.

Apparently, pre WWII, there were a number of tunnels with single track railway lines that connected the Sammarinese capital with the #Rimini station. Fighting in the region resulted in destroying all 17 tunnels, but there is an exhibition, Galleria Montale, which allows tourists to explore a partial tunnel and former rail equipment.

I’d walked down past the bus stop, but it was barely noon. I could ride the bus back, or I could hike back up to the center and find the funicular down to Borgo Maggiore, and catch the bus from there. It seemed a better option, so I proceeded to take the lower kilometer walk back. I passed the every day store fronts of hotels, restaurants, grocery stores and many pizza places, as well as a few public restrooms. Of all the places I’d been, San Marino had more public facilities per hectare than I’d experienced anywhere in the EU.

At the Statua dei Bambini di Beslan, I was prompted to do an internet search, as I’d not heard of Ossezia (Ossetia) and a 2004 hostage tragedy.

After a few more memorials and the civic buildings, I came to the Funivia – Città (Libertà) higher end of the funicular. Getting a ticket and queueing up, I soon boarded the funicular and descended to the Borgo Maggiore (Campo della Fiera) terminus.

We were still in the Republic of #SanMarino, and the city bus stop was about 200 meters away. The bus which originates up in the city came by and picked us up and took us to the train station. We arrived at 2, so I decided to head towards the cathedral and have lunch. I walked past the hotel. I decided that I’d get a slice of pizza to go, and sit out somewhere and rest.

At Chicco di Grano, I had my choice of multiple alternatives, and opted for a square with four cheeses. They heated it in the oven, included a bottle of beer and sent me out on the street.

Trees lined both sides of Via IV Novembre, and I found a bench over near a bus stop. I enjoyed my “slice” and beer, and looked catty-corner towards the cathedral. Finished, I walked up to see if I could get all the way around the church. 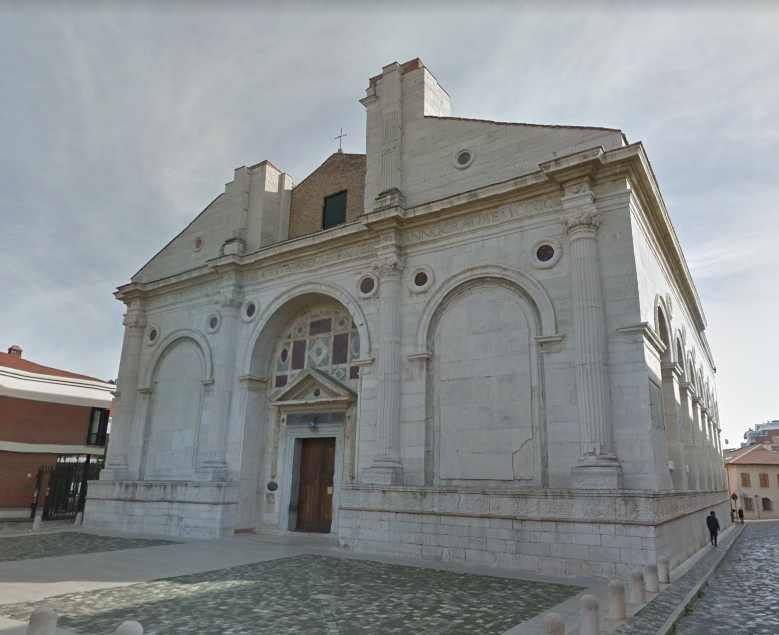 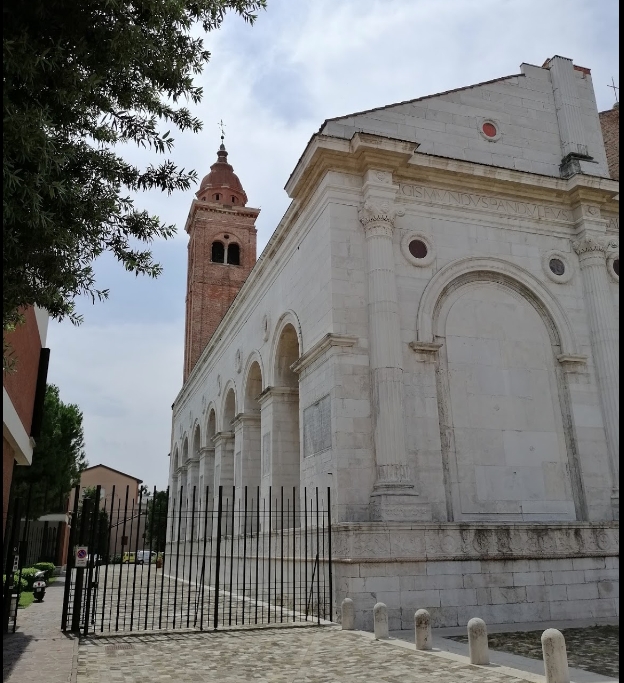 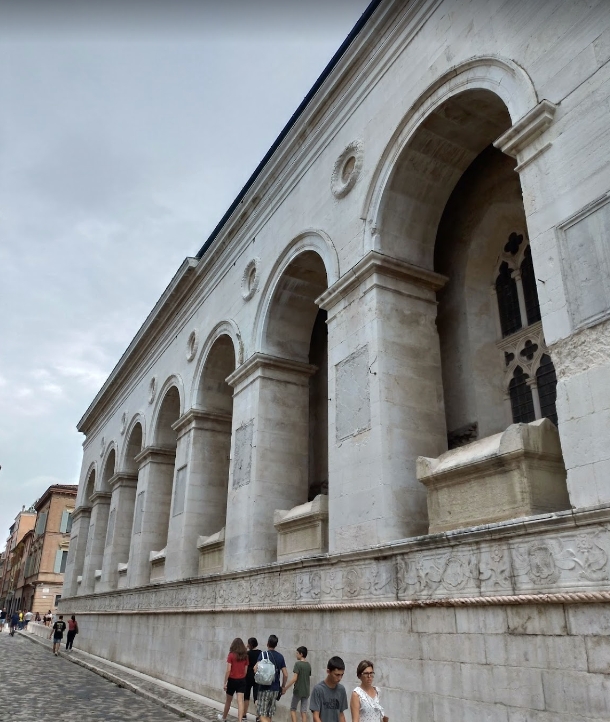 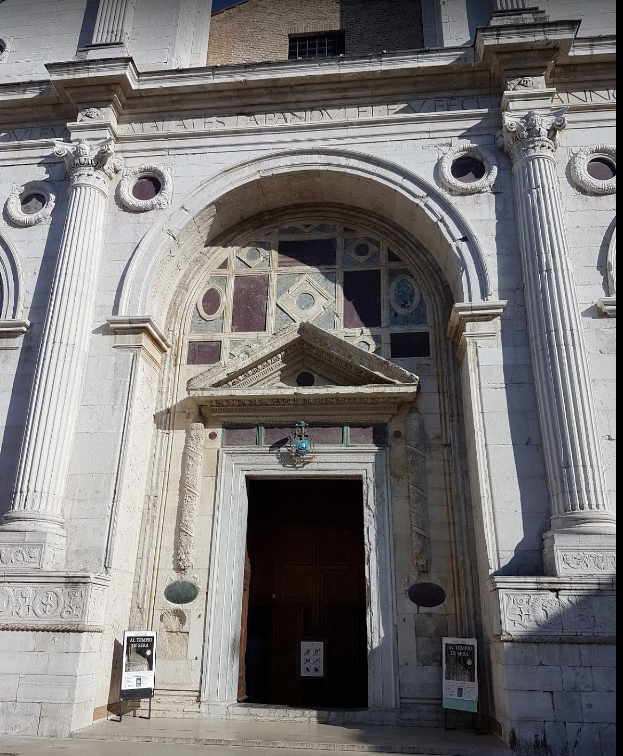 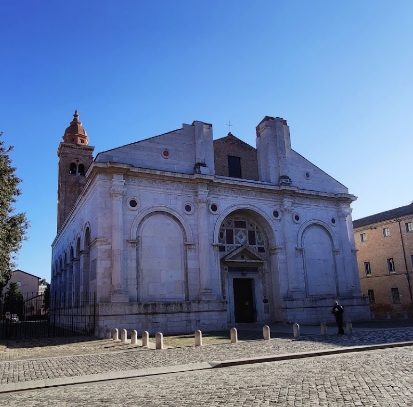 Oriented with the entry façade to the north northwest, there is a cobblestone path along the “eastern” side that has a partial gate with a park bracketed by a U-shaped building. The building includes a bank, several offices, and ecclesiastic functions. I walked to the apse end, through a parking area before returning to the front on the narrow Via Leon Battista Alberti. The sides appear as if an arcade, with sarcophagi at the base of each arch, set about 3 meters above the street. 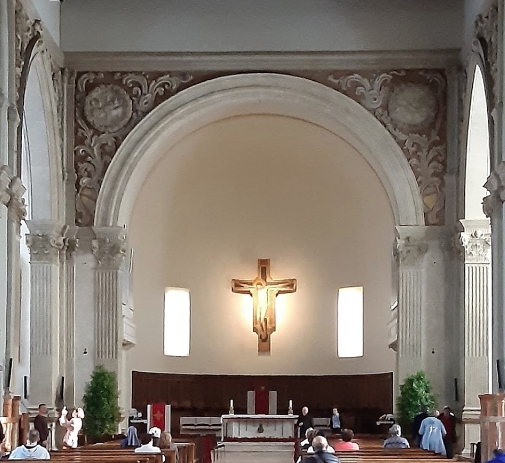 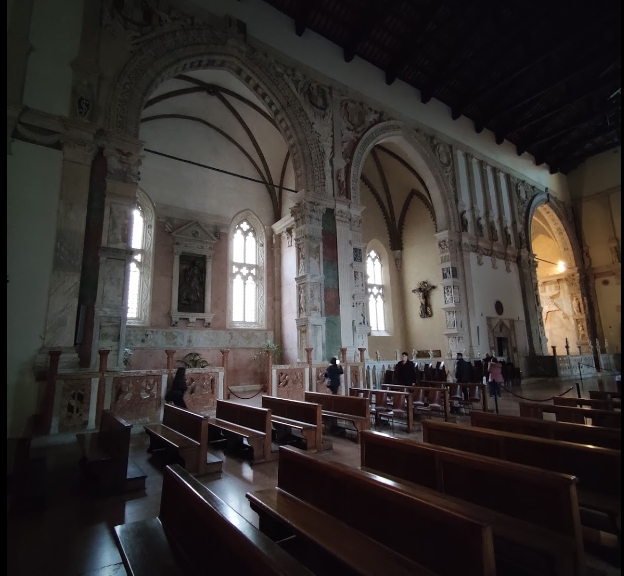 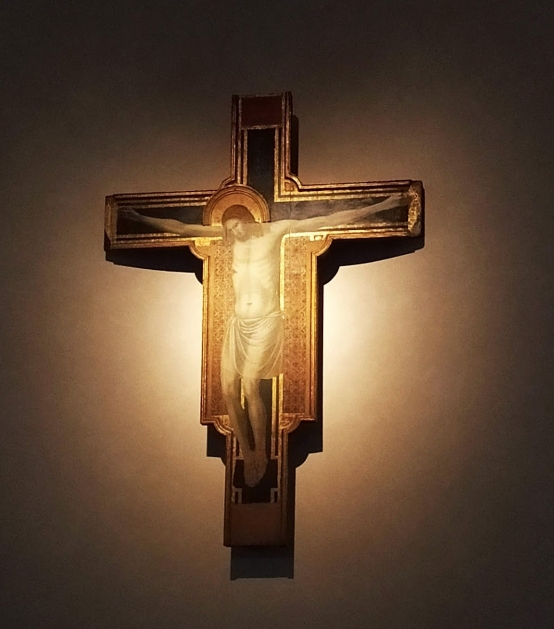 Promptly at 15:30 the doors were open, so I entered. Known as the Malatestiano Temple, it is officially Basilica Cattedrale di Santa Colomba. Per Wikipedia, the building sustained serious damage during World War II and was reconstructed from the rubble. There is an older brick bell tower outside and left of the apse. I found the front façade to be bland – three arches with only the center having any adornment, and having the only entry door. The nave vault shows dark wood beams. Shrine chapels fill what would be the side aisles, opening to the nave with rounded arches nearly full nave height with bas relief ornamentation. High walls along the central aisle are lined with a series of block ribbed half columns and statues of saints. The cross in the apse behind the altar was painted by Giotto.

I as ready to find the beach. From the city center, the railway blocked almost all direct access. After wanting to see the bell tower again, I started heading east on Via Michele Rosa. My intention was to go a bit south, so I could walk the path in a series of parks that probably tracked the old city walls.

At the end of the street, I came to the Anfiteatro Romano, the ruins of a Roman amphitheater. I would have expected it on my walk yesterday. Reaching Via Roma, a block south put me in Parco Maria Callas and near the dog park area. A tunnel took me under the railroad tracks, and into another park, Parco Renzi Madre Elisabetta. I could hear the water. 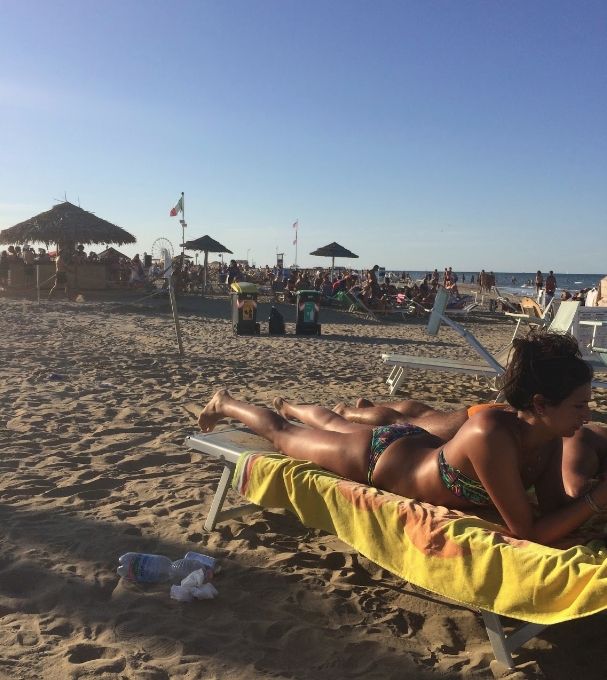 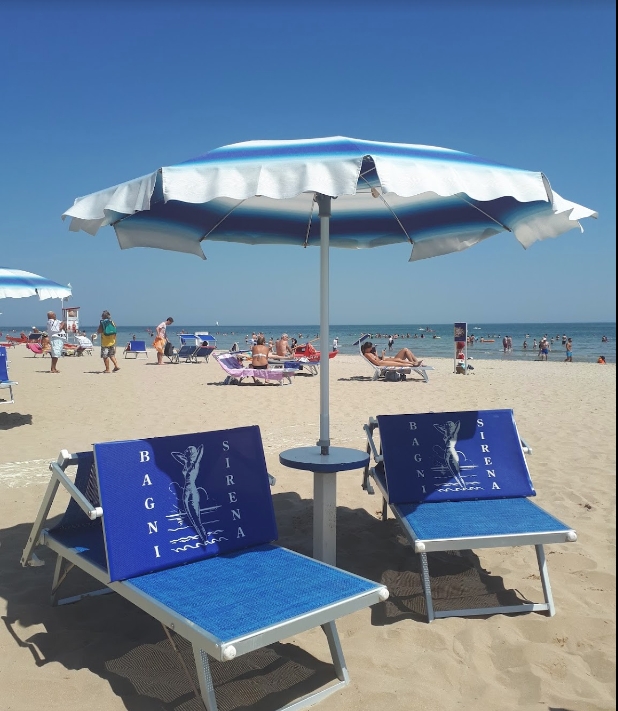 Probably another 300 meters, I was on the “Lido”. Concessionaires had beach chausses, chairs, umbrellas positioned in the sand. One section of beach had been given over to folks flying their kites. Not many people seemed to be going in the water, but it still is May. I queued up at Bagno Tiki 26 and got a margherita (no umbrella) and kept walking north. After about an hour, I’d had enough sand blasting (it was a little windy) and had dumped sand out of the shoes twice.

As it happened, I left the beach at the Rotonda del lungomare – a large mockup of a classic SLR camera - Macchina Fotografica Gigante "Fellinia".

From Parco Federico Fellini, I could walk back to the other side of the track on a single street. About 25 minutes to cross the tracks and another 10 before I was on the other side of water from the hotel and at Osteria L’Angolo Divino. 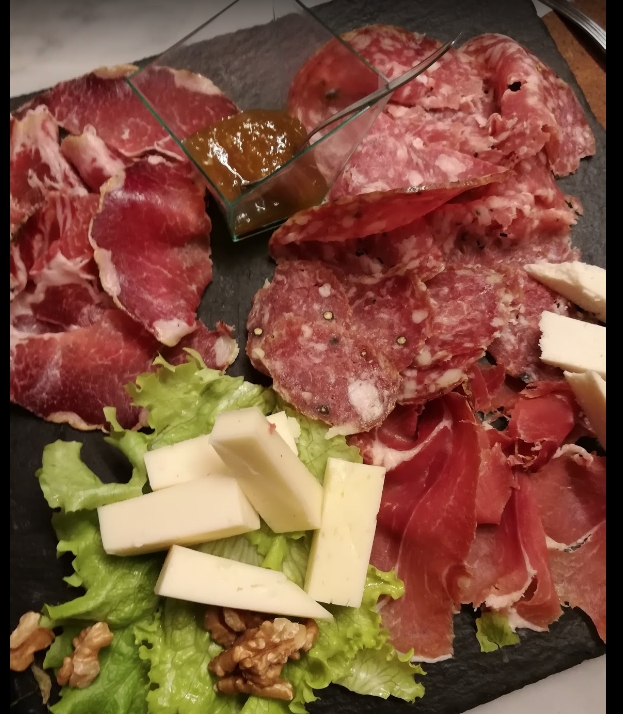 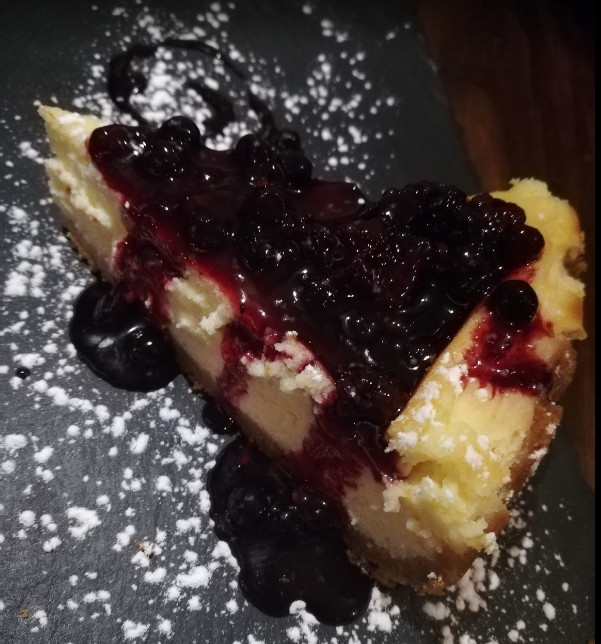 Antipasto to start, a sampler that had all sorts of goodies that I never recorded, and a bunless burger with a fried egg and grilled eggplant. A pitcher of house red worked fine, not sure what it was. And I got talked into a piece of cheese cake, almost a pie slice, topped with black current. Delicious meal!

Crossing the Ponte di Tiberio to get back to the center city, it was about 10 more minutes until I got to the room. I’d managed to get the journal more or less up to date, so all I needed to do was download photos and start writing this post. A busy day tomorrow in Bologna, with an early train. Got to get to bed!