Well, I got up a little earlier than planned, cleaned up and packed a partially empty bag. Out and off to the laundry, to collect my now clean clothes which I forgot to get last evening. Fortunately, we were both on time, and I was the only one there, so I could open the luggage and put clean stuff into place. Leaving an extra tip, I zipped up and headed off to the Ferrara train station. The 9:17 train was direct to Ravenna, getting me there at 10:30. Fortunately, I was coming in from the north and was on track 1, so I didn’t have the stairs to deal with.

A rotary rules the street out in front of the station, so one has to get beyond it to cross in order to go straight out of the station. Two blocks up Viale Farina and a right, I was at the NH Ravenna Hotel, my lodgings for today.

A modern block building with three levels of rooms, I checked in and have a room on the first level (in the US, that’s the second floor) looking east out over a parking lot. I wanted to fuss with my clean clothes, but I had an 11am appointment.

When I was building the itinerary, I began looking at theaters in the cities and towns where I’d visit. Maybe there would be a late season performance? Well, for #Ravenna there is the Teatro Aligheri and they have a 10€ tour at 11am on Saturdays. I would be there. So back to Viale Farina one block more, south a block and then a block west. Surprisingly, there were ten of us for the tours, 6 in English and 4 in Italian.

Anna was our guide. I’d actually made my arrangements with her, expecting to have a solo tour. With six there should be more questions, I hope. The tour started in the lobby, where Anna explained the history of this building, its predecessor and also the several renovations and restorations that have happened in the 170 years that the building has existed. We went upstairs to the room over the porch, which had been a casino and now was the patron’s room. Between the “casino” and the auditorium is the promenade, the large space where attendees mingle during the intervals.

Into the auditorium itself, we entered the center box of the loge level, above the parterre boxes. Built for eight, it ws a little cozy, but we were at what many consider to be the best seats of the house. The red curtain indicated its status, rather than the blue used throughout the house for the other boxes. The floor, set with chairs, seats 334. The theater has five rings of boxes, typically seating 4 or 6. Down to the floor level, we walked to look at the orchestra pit. This can be filled in with additional seating when not needed, such as theater, recitals, bands, orchestra, cinema, lectures. The Ravenna Summer Festival is very popular and begins in about a month.

Slipping around the side, we climbed a short set of steps to walk on stage. While there is no performance tonight, the lighting crew was using this opportunity to clean and replace spots and gels. Anna then guided us to a pair of rehearsal rooms and two dressing rooms. Returning to the stage, as we crossed, I took the opportunity to softly sing the first line of “Take me out to the ballgame”, dropping my voice into its basso range, thus making this the third stage where I’ve sung. (The other two are the Met in New York and the Opera House in San Francisco.) As we walked up the center aisle, I hoped to return and attend a performance.

The other five disappeared quite quickly, but I asked Anna if I might treat her to lunch. She had finished her day, and needed to get to her family, so declined with thanks. It was only noon, and the cathedral would be closed until 2:30. I had a GPSMyCity tour of mosaics in Ravenna to read, some homework I’d not done.

Across the street was a self-service restaurant, Gustavo Bizantino. Something quick and easy, I ordered a Piadine Bresaola with a glass of red wine. Bresaola is cured beef, and a piadine is a wrap. It came warm, with mozzarella and salad greens. Not into visible fat, I trimmed mine before eating. Meanwhile, I pulled up the 10 page document and began reading.

With not much text, the pictures had me anxious to get going. Ravenna has a lot of history, as a capitol under Roman, Ostrogoth and Byzantine rule. There are eight UNESCO sites with 5th-6th century #mosaics to see. If timing and fortune allow, I would be able to see 6, maybe 7.

The closest was the Arian Baptistry, 5 minutes away. A small octagonal brick building, one approaches on a cobblestoned road. A short stairway dropped over a meter to get to the entry archway, which descended a few more steps. Four curved arched niches are set in the brick walls. Arched windows permit natural light. The circular mosaic is the ceiling, showing the baptism of Christ by John the Baptist, surrounded by the apostles. Sea blue-green, white and gold are the predominant colors.

Less than 10 minutes to the Basilica di San Vitale. Sixth century, construction was started under the Ostrogoths but completed under Justinian I, the Eastern Roman Emperor. A fairly large octagonal church, its construction includes early flying buttresses and a round bell tower. Eighteenth century renovations include adding frescoes, but the mosaics are truly brilliant. And one needs to spend time looking at the floor, including a labyrinth, despite your eyes constantly being pulled upwards.

Practically adjoining, the Mausoleo di Galla Placidia is considerably smaller, and from the exterior, an older cross shaped brick building. Also a popular tourist site, queuing up and group admission for a limit of 5 minutes inside restricts the possibility for full enjoyment. 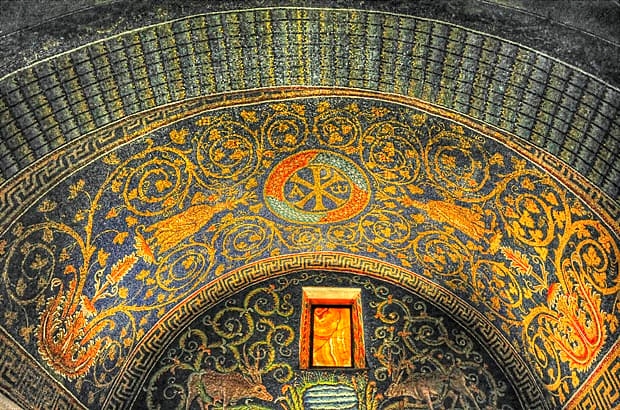 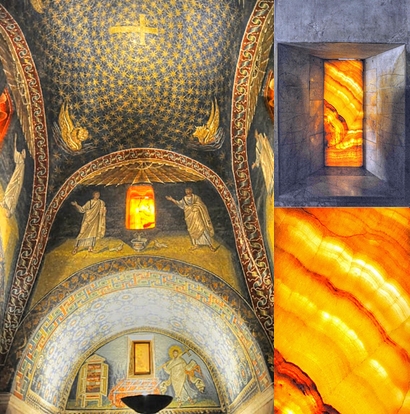 Marble wainscoting below marvelous mosaics. Windows are sliced onyx, but electrical lighting is also used. This was the mausoleum for Galla Placidia, daughter of Emperor Theodosius I. Unfortunately dark, and limited time, but this preserves the building for the future.

Following my routing, I next approached the area around the cathedral. The Duomo actually included two of the UNESCO mosaic sites, so I could achieve several goals.

In Italian, Cattedrale metropolitana della Risurrezione di Nostro Signore Gesù Cristo; Duomo di Ravenna, it is dedicated to the Resurrection of Christ, and became a basilica in 1960. An 18th-century Baroque design, it replaced the earlier 5th-century Basilica Ursiana cathedral. Cruciform in layout, the entry facade faces northwest, and there is a dome over the crossing.

A massive deep porch provides covering for the three entry doors. There is a raised vault over the central aisle. An older circular brick bell tower rises away from the north side.

To the north of the cathedral behind the tower is another octagonal brick building, the Baptistery of Neon. Oldest monument in Ravenna, it was the Orthodox baptistery (as opposed to the Arian) and was built on the site of a Roman bath. It used to be part of the older Ursian cathedral.

Why octagonal? It represents the seven days of the week plus the Day of Resurrection. The mosaic in the dome again represents the baptism in the River Jordan of Christ. It has a blue rather than gold background, and the saints' garments are gold and white, rather than white in the Arian baptistry. In the center of the floor is a large (empty) pool for full immersion baptisms. There are arches covered in blue mosaics around the walls, with windows above between the arches and the dome, permitting natural light.

Continuing around the apse end of the cathedral to its southeast corner is the Cappella Arcivescovile di Sant'Andrea. A private chapel for the archbishop, it is part of the episcopal palace and the smallest of the mosaic sites. Again, the floor is lovely, when the crowd parts. The building is cross shaped, with four arched setbacks. A small altar sits opposite the entry door. The ceiling mosaic shows 4 angels, the symbols for the 4 Evangelists and the chi-rho symbol for Christ.

Leaving the cathedral compound, heading east, is the Basilica di Sant'Apollinare Nuovo, originally the palace chapel of the Ostrogoth King Theodoric the Great, an Arian Christian. Justinian I, the Byzantine emperor renamed the chapel from “Christ the Redeemer” to St Martin and suppressed the Arians. Pope Gregory VIII renovated the mosaics to remove any Arian messages and symbols. 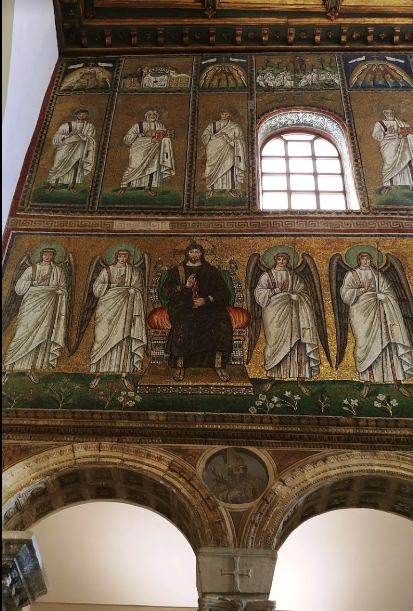 It was subsequently renamed to St Apollinaire when relics were moved from the earlier church. Above the off-white columns of the nave are long mosaics: the south wall is the Passion and Resurrection, while the north wall the miracles and parables. A sequence shows the approach of the Magi, in trousers, and named Balthasar, Melchior and Gaspar. Christ is presented a clear faced on one side, bearded on the other.

The seventh heritage spot was a kilometer and a half away. I would pass my hotel, and it was a bit before four. I thought about going up to arrange my clean clothes and thought better of it, and headed to the Mausoleo di Teodorico. Istria stone was used to build the two-level circular mausoleum. On the upper floor is the Porphyry sarcophagus of Theodoric I. Signage proposed that the lower level was used as a chapel. A dome caps the upper level.

As it was almost 5, I headed back to the hotel. Crossing over the rail tracks again, I “returned to town,” from Parco di Teodorico to Parco Publico Rocca Bracaleone. In the latter was an outdoor movie theater within the walls of an old fortress. At a corner opposite to the hotel, Himalaya, an Indian takeaway shop sold me a bottle of beer and several garlic naan, which I took up to my room. Kicking off my shoes, I pulled the laundry out and started sorting, adding to the pieces I still hadn’t worn. After getting them all back in place, I pulled out my journal and poured the beer, and began my scribing.

Checking Google for nearby restaurants, most of the options appeared to be to the west, all within a 10-minute walk. Most intriguing was the Antica Bottega di Felice. Reported as a cozy neighborhood destination for the distinctive dishes of the Romagna region. (I am in Emilia-Romagna.) And they’re a deli, so I got fixings for tomorrow. I had the front desk call and they were able to confirm a table for me. 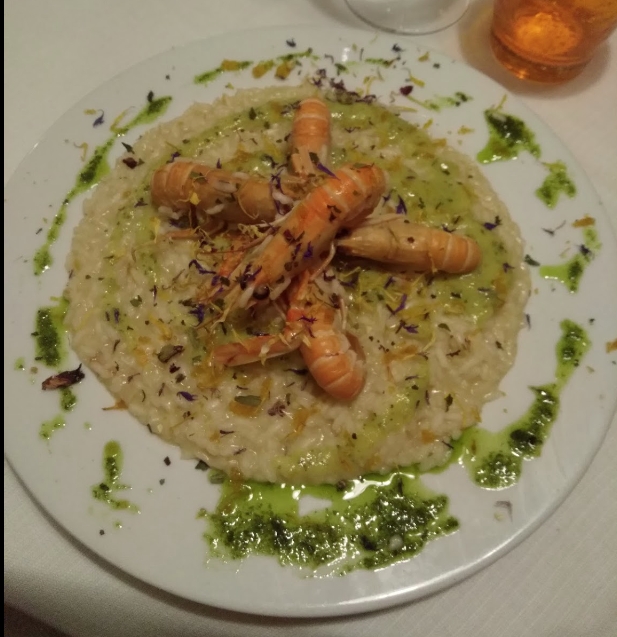 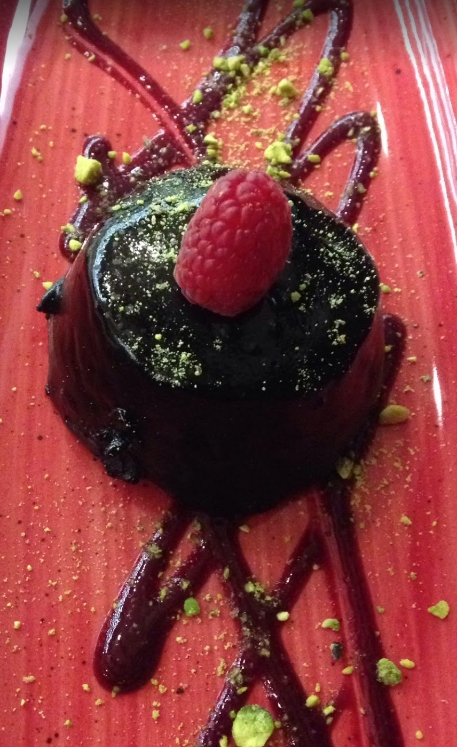 Just a small plate of antipasti to start: olives, stuffed pepperoncini, mortadella, salami, cheese and prosciutto. Crawfish risotto that was to die for. And very filling. And with them both, the red of the region: Cagnina di Romagna. But I wasn’t done: especially since the desserts here are special. Never fail in my book with dark chocolate and raspberry. Plus I walked out with a paper sack with bread, cheese and sliced cold cuts for tomorrow.

Returning to the hotel, it felt like I was walking restaurant row, mixed with shops and a large gym on one corner. Via Paolo Costa ran from dinner back to bed. I put the sack in the minibar, plugged in chargers and began writing. I’ve got 38 pictures to fold into the blog and then post it.