Bringing my taxi reservation information to breakfast, I left it with Joshua, the morning front desk person, who also asked if I could slip my massage this afternoon back half an hour, which was okay. After hot chocolate, muesli and yogurt, banana and juice, I headed to the Kanun bus stop (a little further than yesterday) and caught the #51 Mtarfa bus. Twenty minutes later, I was ready to climb into the Silent City of #Mdina.

Crossing over the bridge spanning a former moat and now splendid public garden, I passed through the Mdina Gate. Immediately immersed in a time warp, with buildings from the time of the Norman invasion through the French Interregnum evident. Sticking to the eastern walls, four blocks brought me to the Archbishop’s Palace below the great dome of the cathedral. 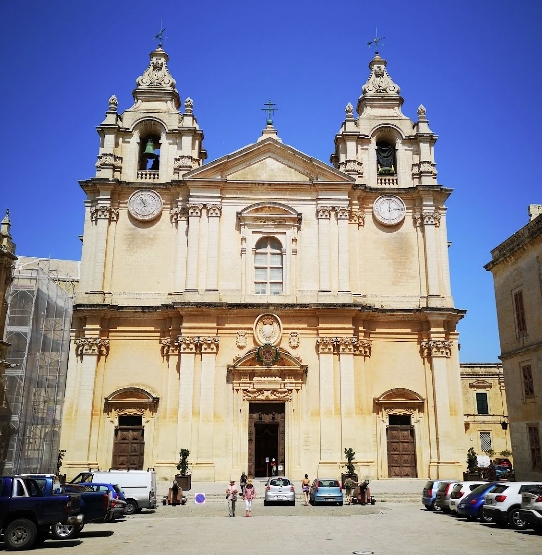 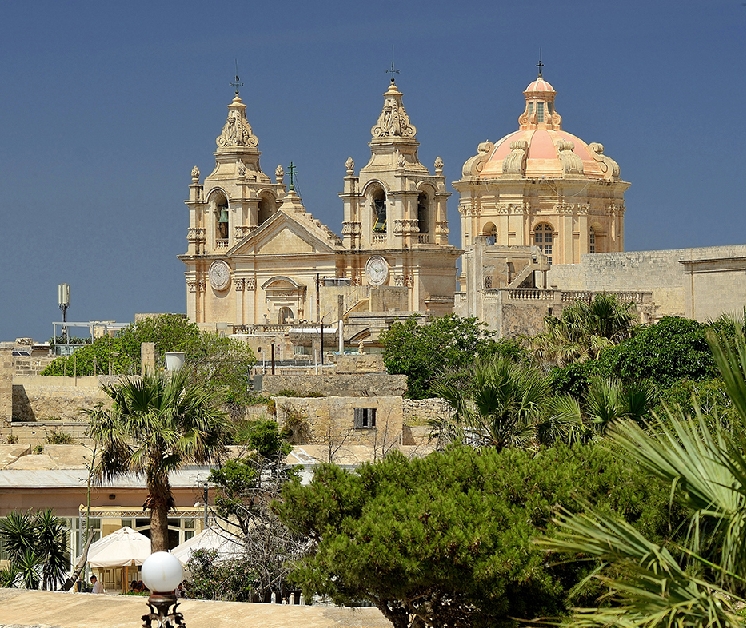 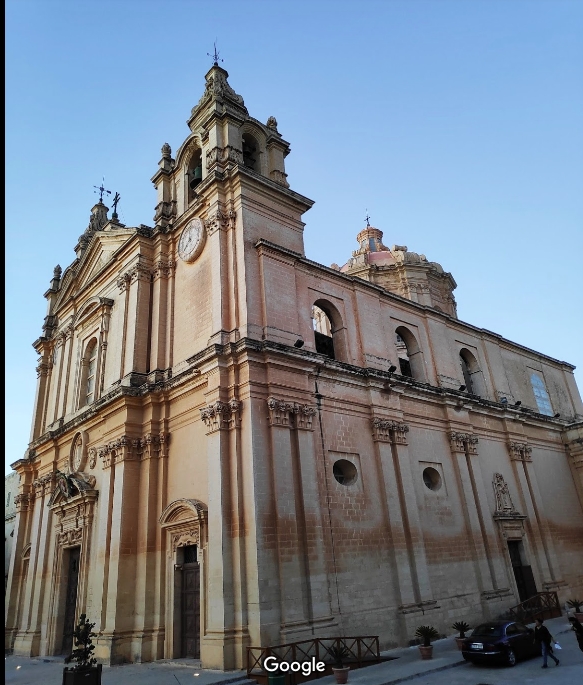 Walking around to the west into Pjazza San Pawl, I stood facing the Katidral Metropolitan Ta’ San Pawl. Per legend, the cathedral had been built over the spot where Roman governor Publius met the Apostle Paul, who had been shipwrecked on Malta on his way to Rome. This baroque building replaced a damaged Norman-Romanesque church following the Sicilian 1693 earthquake, incorporating some older elements. During the Arab period, the earliest cathedral had been converted to a mosque.

From the St Paul’s Plaza, the lantern dome isn’t really visible, save the cross atop the peak. Two matching bell towers with clocks define the interior side aisles with their own entry doors. With columns on the protruding entry, the central main door has a triangular pediment above with several shields in medallions and a framed window on the level above.

Entering, I paid my admission fee and collected an audio guide, which I tucked into my cargo shorts pocket for later use. Not a huge church, my circumnavigation found side chapels, organs in the transept, the cathedra and an ancient baptismal font. The vault paintings are awesome, given that they date from over several centuries. Checking the postcards, it seems that somebody has a job of matching various hangings to the appropriate vestment colors. 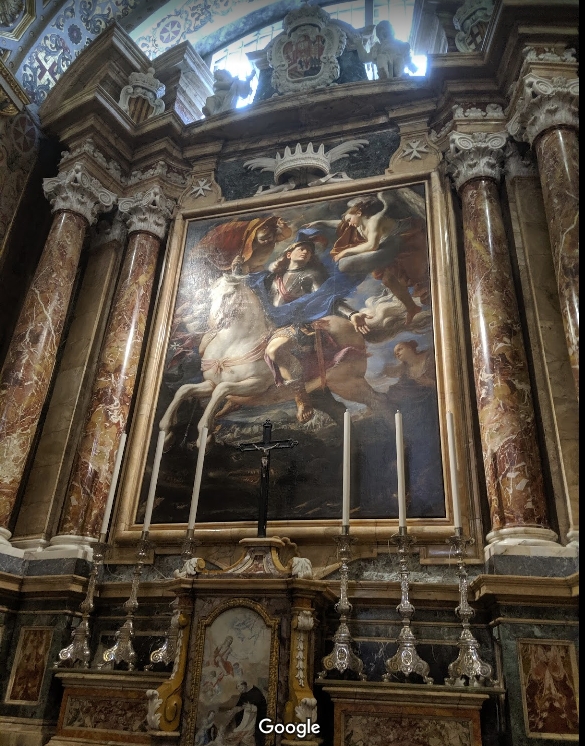 Plus pulling the red covering off the bishop’s chair, which sit almost outside the chancel. After my own discovery, then listening to the audio guide was revelatory – there’s always something I missed or something new to learn.

Leaving the #MdinaCathedral, I continued walking around the walls, just taking in the ambience. At a nice little park called L-Imdina, there were some great views north.

Coming around, I was in the old Jewish quarter, including the locations of the old synagogue and silk market.

Many of the streets were too narrow for vehicles, making for a pedestrian friendly time. Quaint courtyards, pocket gardens, horse-drawn carriages, a few tourists wandering and posing. A nice breeze kept me unaware of the increasing temperature, although I did reapply sunscreen several times. And shops kept popping up, selling bric-a-brac and souvenirs, although I couldn’t find a hat pin. 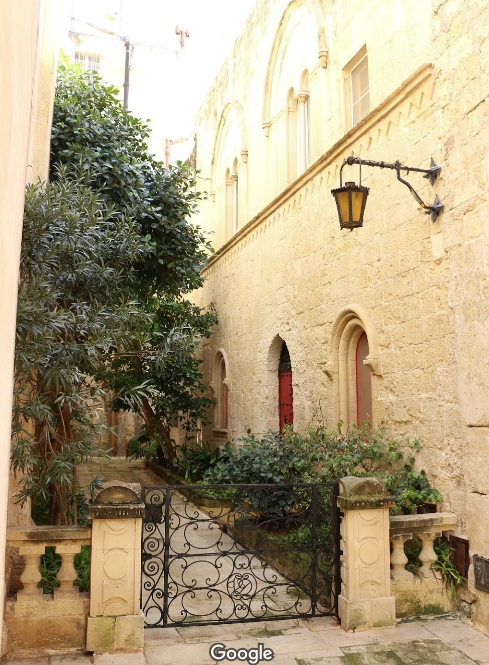 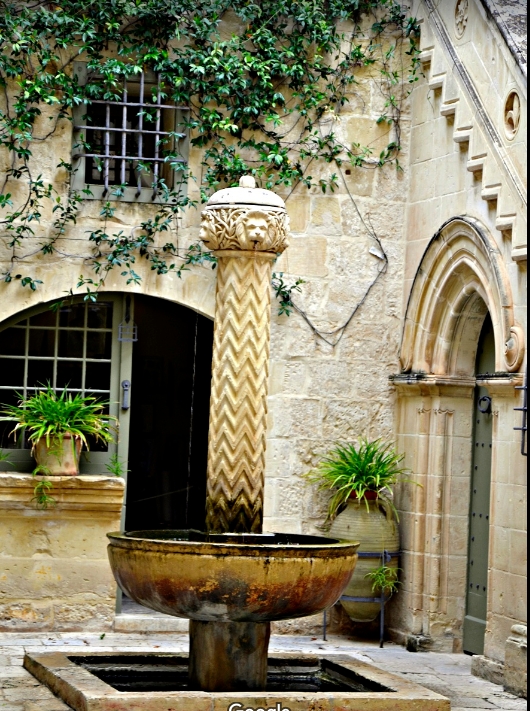 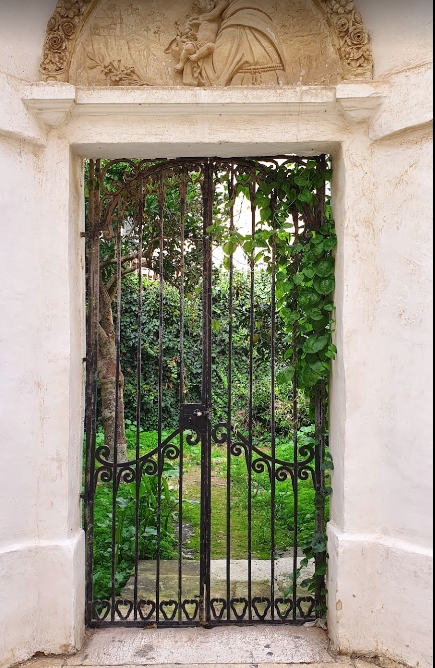 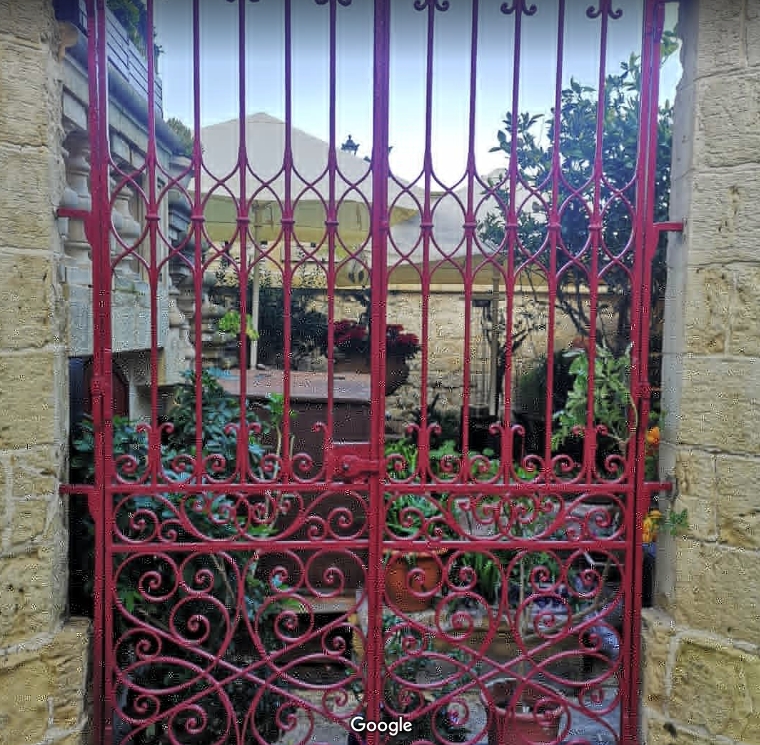 Returning to the Mdina Gate, I walked back across and headed down into #Rabat, the neighboring village. I started by heading to the Domus Romana, but while passing Ta’ Doni, I decided to take a break for lunch.

Keeping it simple, I just got a sandwich on a fresh (delicious) roll with tomato, arugula and onion, and a glass of rosé from a winery on Gozo. While dining, I was able to get most of my Mdina visit into my journal.

On to the Domus Romana, where the tile flooring was remarkably in great shape – much better than what I’ve seen travelling the Western Med. It’s a nice museum, with a lot of recovered items on display. The back, with the actual domus ruins, gave an interesting vantage on what archeology is being done.

Coming around, with the goal of visiting the two catacomb sites, I chanced on Casa Bernard. 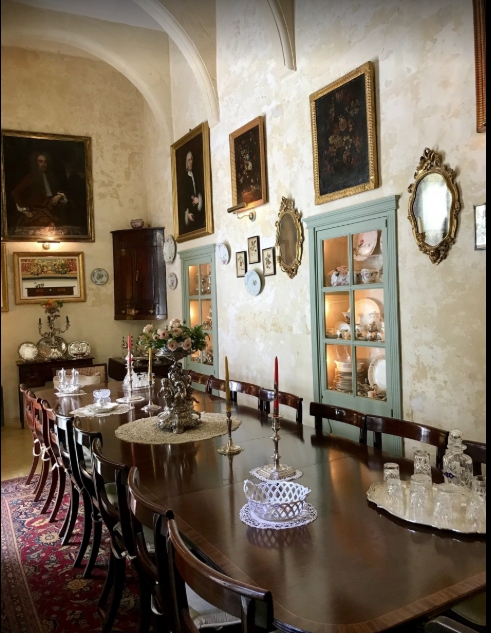 A 16th century palazzo, it has stayed in the same family’s hands, and they offer access and tours. So I paid my admission and joined a tour of the palace/house. With all the pictures squeezed onto the walls, it reminded me that I’ll be back seeing my own filled wall space in a matter of days.

The next building to catch my eye was the Parish Church of St Paul, built over a grotto.

Entering, I learned its title is the Collegiate Basilica of St Paul. I had to give my eyes time to adapt when I entered, as the interior is quiet dark. Wanting to visit the grotto where Paul was supposed to live for 3 months in 60 CE while on Malta in Melite, I learned I needed to access it through the Church of St Publius, via the Wignacourt Museum. Which is where I went next. 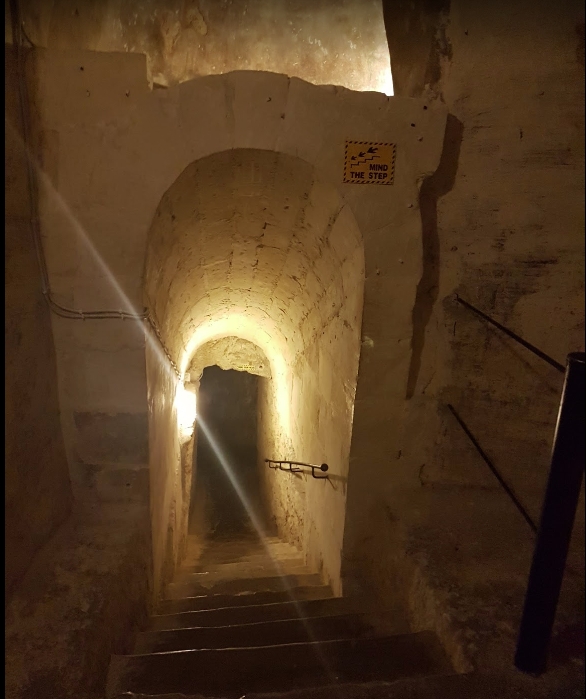 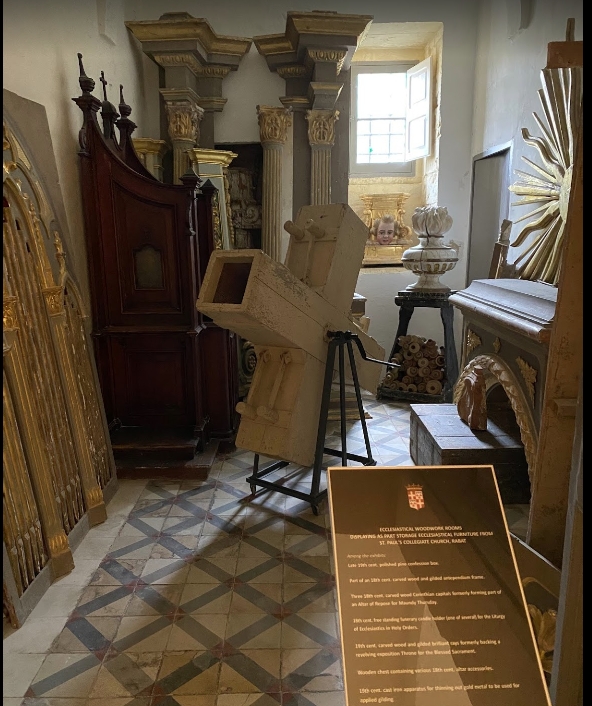 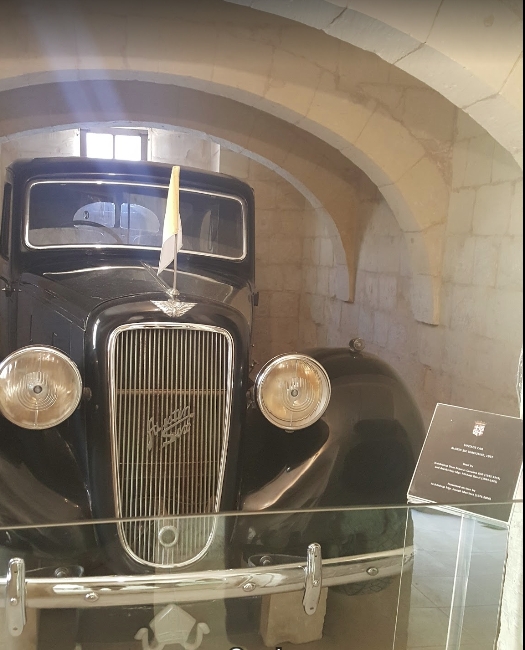 This had been the residence for the Chaplains of the Order of St John, and now contains a great deal of art, a few classic automobiles, and a narrow, low tunnel to get to the grotto. I really didn’t do it justice, as it probably should get an hour plus, but I was intent on the catacombs, and I had a massage appointment back in #Valletta.

The two catacomb sites are opposite one another on the same road Bajjada Triq Sant Agata. I saw St Paul’s first, which, it turned out, represents the earliest archeological evidence of Christianity in #Malta.

While interesting from a historic perspective, it did feel a little creepy to be looking into these many tombs. Plus my claustrophobia was beginning to kick in from all the underground explorations I’d been making.

Crossing the street, the Historical Complex of St Agnes was definitely where I should have started in Rabat.

A much more thorough and varied exhibition, the complex presents more of the Christian history in the Mediterranean and Malta, with multiple examples and good documentation. I actually spent almost an hour here, as there was so much to examine.

Back outside, I checked with Google on the best way to get the bus back to Valletta. I had to walk back past the grotto church before crossing to the Rabat Saqqajja Bus Station. There I waited for a #52, which loaded up at 3:40, and it took off and 20 minutes later dropped me at Kanun, where I’d started this morning. A few minutes later I was at the Guest House, and checked that I was still on for a 90-minute deep tissue massage at 4:30. All was in order, so I headed to my room and dropped my gear. Feeling a bit sticky, I took a warm shower, and put on a clean t-shirt and a pair of shorts, with my flip flops. Antonio tapped on my door, and we headed to the massage room.

I got naked and under a bath sheet, and he started vaporizing some essential oils. We talked a bit about my massage needs, and how much pressure, and where Antonio needed to maybe work a bit more. And then I just blissed out.

Resurfacing sometime after 6, I tipped Antonio and went and sat in the common room. The boys from Leeds had just come in and were talking with Adrian. We all chatted for a bit, and then, on learning it was my last night, Joseph proposed that we got to the wine bar, which I’d planned on going to anyway. We three repaired to our rooms to freshen up (massage hair needed attention) and regrouped in reception. Half a kilometer, and we were looking for a table. Hank spotted me, and found us a table for 3 in the doorway, half inside, and half out. The boys went for Champagne, so I joined them with a sparkler from Gozo. We ordered a happy hour platter and I asked Hank to bring me two tastes, while the boys asked for an Italian Chardonnay. People kept arriving, and I took a picture looking into the bar to show how crowded it had gotten. Apparently, the VespaClubMalta meets here the first Thursday of the month, and that was tonight. 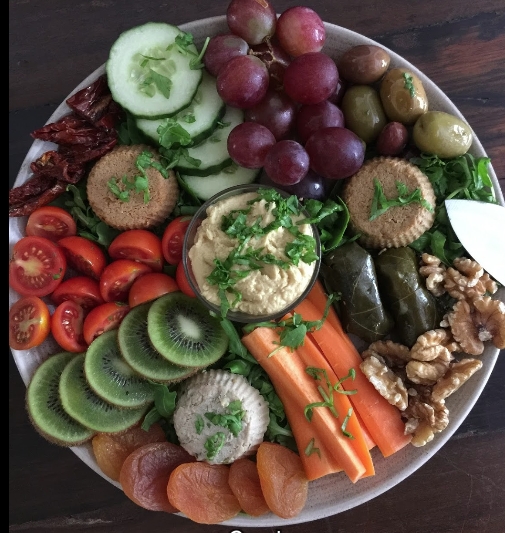 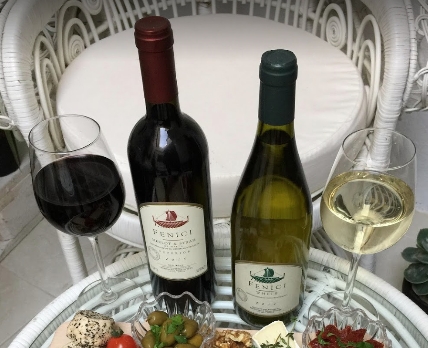 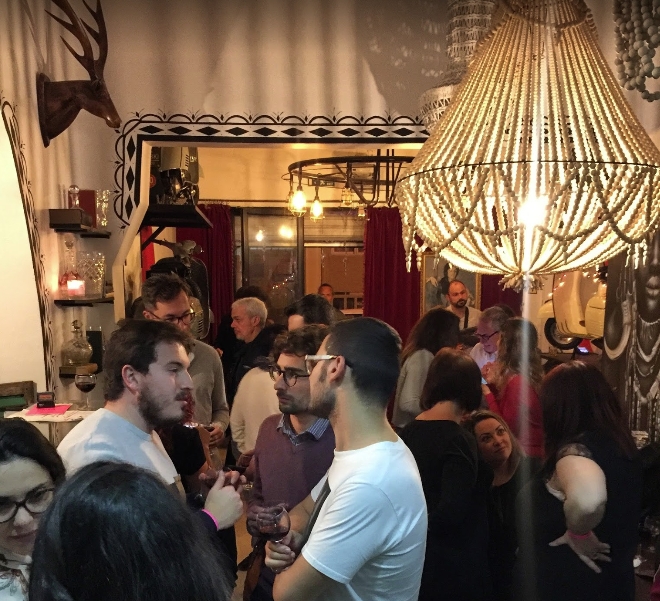 Hank returned with a red and a white from Fenici: the white, a blend of chardonnay, vermentino and viognier; and the red a blend of merlot and syrah. Fenici is a Malta label under the Meridiana Wine Estate group. The white was crisp citrus for taste, nice with the hummus, walnuts, fruits and veggies on the platter. The red, with this vintage not using cab which they have traditionally done, was young, fruity and medium-bodied: the cheeses, pate and stuffed grape leaves actually did pretty well. Rob had claimed the grapes, and Joseph let me have one olive and one apricot.

About 8:30 it started to clear out, so we settled up and hit the street. Walking away from the Guest House, we got about a half kilometer before we decided on Afghan Natural, a halal restaurant. Fortunately, we’d had enough alcohol, as it wasn’t served. 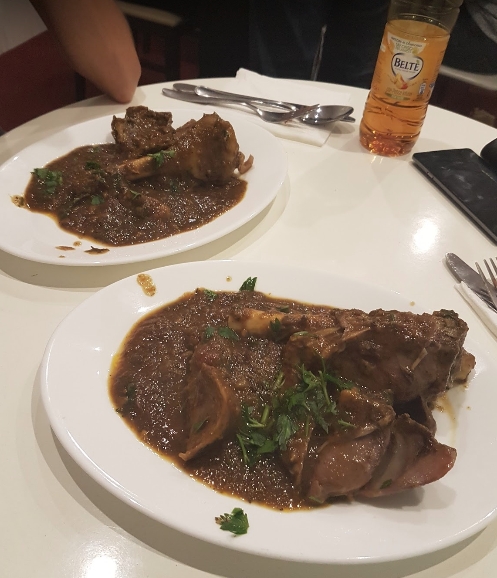 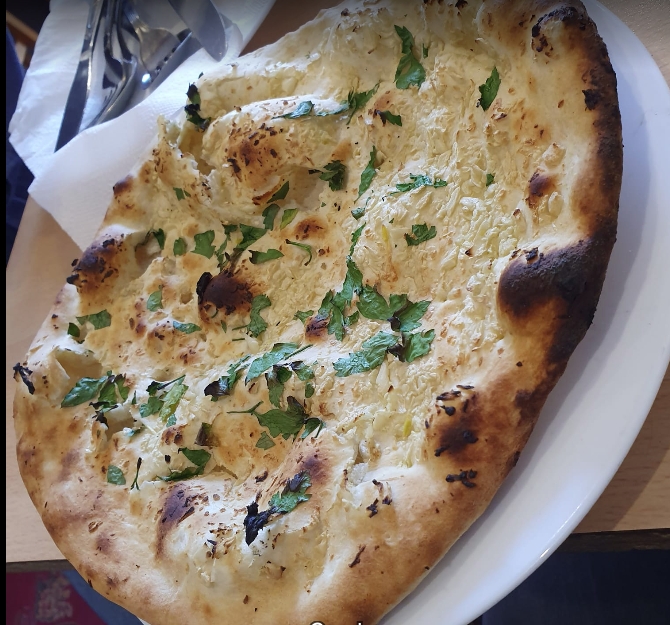 We all ordered the lamb shank curry with special rice, and three orders of garlic naan. We tucked into our meals when they came out, all enjoying both lamb and curry, and well prepared.

Heading back, the boys offered a nightcap, but were still ready to be out and party. I declined, and wished them a great evening, and headed on back to the guest house. The guys parted at Feel Lounge, which had music pumping out onto the street, and I continued wending back down St Joseph High Street. Adrian confirmed the taxi would be picking me up at 9:30, and I then got online to confirm with United and Lufthansa for the first two legs of my flight. I had at least half my day to still journal, so that was my next priority. Then after downloading photos, I began this blog. Once I’ve got it uploaded, I can dig out the backpack and start shuffling stuff around for my next two days.