Okay, I have to be honest. I start the day in a flat in Vicenzia, and for at least two months I’ve been spelling it and pronouncing it as “Vincenzia”. Probably from having an uncle named Vincent? In any case, I’ve hopefully corrected any typos and will keep Vicenza on my radar.

Next on the itinerary is two days in Venice. Having picked up provisions, I made myself scrambled eggs with the cheese I found in the mini-frig with the roll I got last night. I even figured out how to make a cup of coffee. (Boy, do I miss my Keurig machine.) Repacking after bathing and dressing, I put last night’s dessert carefully in my sack with the camera and journal, put the yellow parka on as the weather looks threatening, and closed up the flat. Down to the street and I roll the big blue to the train station. The gods are on my side today, as I don’t have to use the subway to get to my platform. Trains run regularly, and I made the 9am. The ride was 45 minutes, long enough to finish my confection.

When I was planning Venice, I reached out to ViaHero again, this time selecting Elisa as my Hero. We’ve had long email dialogs covering my interests and her suggestions for Italy. While I only had her plan a day in Venice, she suggested my lodgings, and advised on my first day’s plans. I was so impressed, I used her again for Florence, Sienna and the Amalfi.

Arriving at the #Venezia Santa Lucia station, it is a terminus, having crossed from the mainland on a causeway. I got out of the carriage onto the platform, rolled it to where the engine had stopped, and turned east. Through sliding glass doors, a plaza abutting water with a domed church across the short expanse.

My first objective was to drop the bag at Hotel alle Guglie. As Venice is a vast collection of islands, there aren’t many straight paths, as one is always looking for the bridge from one island to the next. I was staying on the island of Cannaregio. To get to the hotel, the directions were easy, deliberately so – I’d selected it for its proximity to the station. A half kilometer, passing two churches and only one bridge, it’s the one known for its gargoyles. I was there at 10, too early to get my room. Signing in and leaving my bag, I was handed a small packet of information, including a tourist map, which proved to be rather helpful. 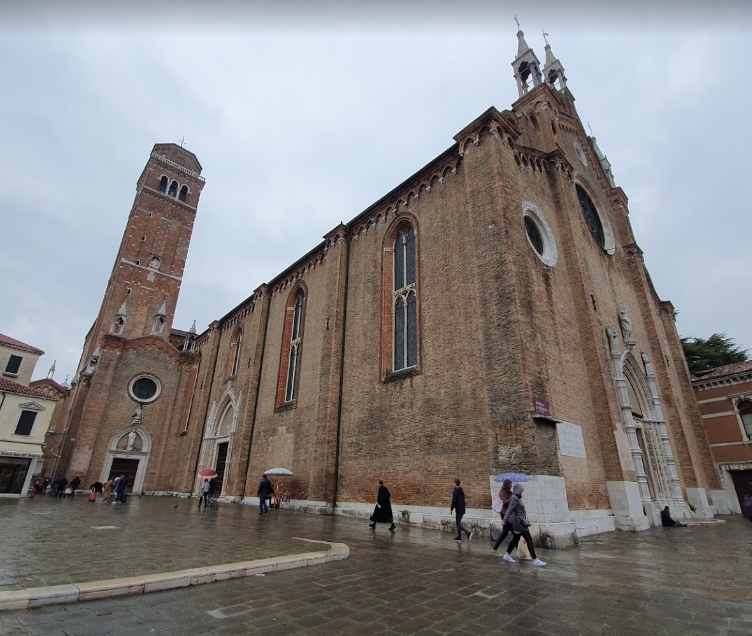 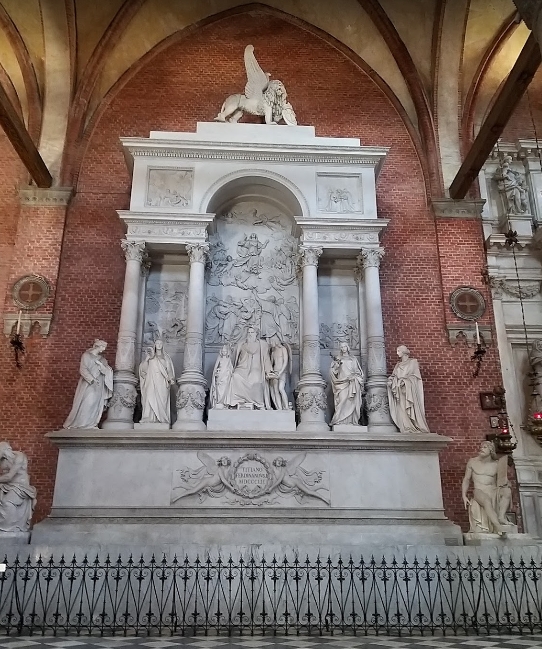 A Gothic style church which is the final resting places for composer Claudio Monteverdi, sculptor Antonio Canova (heart only) and painter Tiziano Vecelli, known as Titian, as well as 4 Doges. With 11 chapels and 6 altars outside the presbytery, the interior abounds with painting and sculpture. I really didn’t do it justice – it probably deserves a half day.

Moving on to the only Greek Orthodox Cathedral I could locate in Italy, I had to cross the Grand Canal again, which meant 2 minor bridges before I could get to the Ponte di Rialto.

Domed and tall, with a standalone campanile, the entry faces the last canal I crossed. Unlike most of the Greek Orthodox churches and cathedrals I’ve been able to see the insides of, this church has no general seating, but rather is set up like the more orthodox churches, where seating is around the sides and generally reserved for the aged and infirmed.

Walking towards the Bacino San Marco, I turned west and began crossing two islands via bridges. At the third, Ponte della Paglia, I began walking under the loggia of the back of the Doge’s Palace. Rounding a corner, I was approaching the Piazza San Marco, which seemed to have about half the tourists in Italy milling about. Carefully dodging those enraptured with their smartphones, and moving much more slowly, I approached the Basilica Cattedrale Patriachale di San Marco. 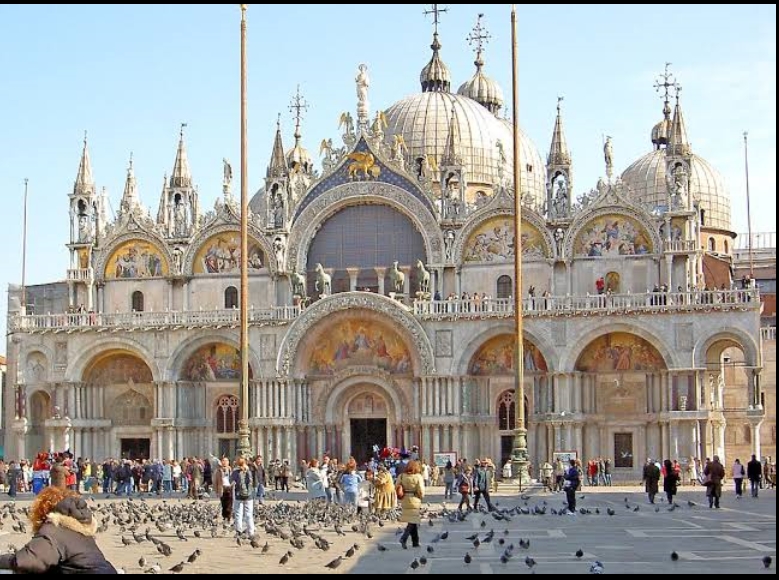 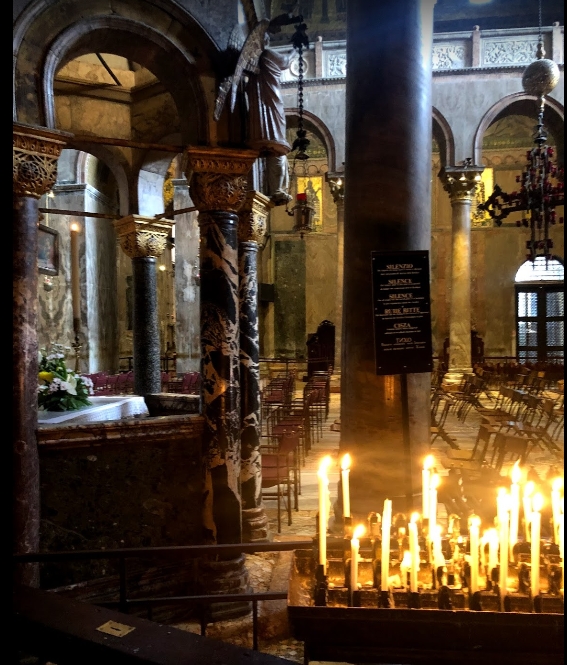 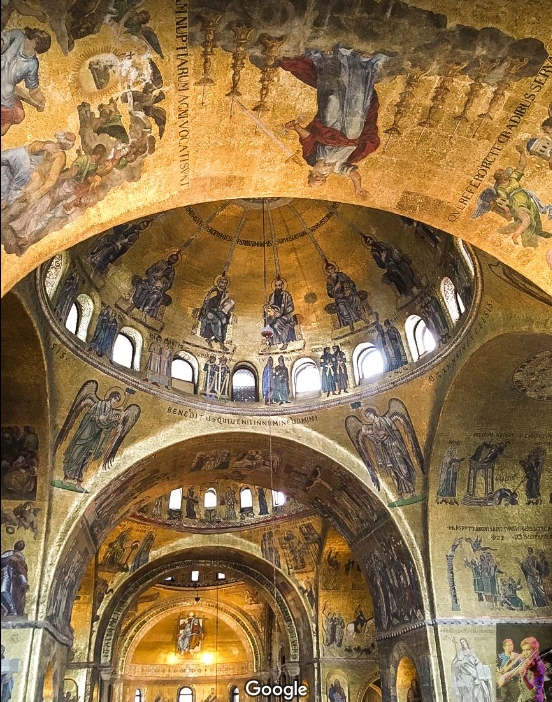 With five gilded domes (three of equal size, the center/crossing and west are larger) and a huge western façade, I don’t believe that from the plaza you can include all five. Perhaps from the campanile? Having purchase my admission ticket online two weeks ago, the queue I joined was only 20 deep, beer than the 250+ of those waiting to buy tickets. I was timely, and able to join a guided tour in English. There is a vast amount of mosaic work; the Venetians supported the production of tesserae at the glass factories on the island of Murano. In addition, there is a lot of gilded goldwork, to the point that the church is also referred to as the “church of gold”. The tour also took us to the balcony walk up over the arches giving access off the piazza.

My ticket also included a trip to the top of the campanile. At almost 100 meters in height, it is the bell tower for the basilica. With a brick exterior for half its height, at 2 meters per side, the logia and 5-bell belfry adorn the top. It continues to sink, and the repair after the 1902 collapse has begun again. Again, I used the lift to conserve time. And the view is spectacular.

My final planned stop for the afternoon was the opera house Teatro La Fenice. Walking to the west end of St Mark’s Plaza, I continued through the shopping district and crossed another bridge. I had purchased a ticket for the guided tour online when I was getting my basilica and campanile tickets. 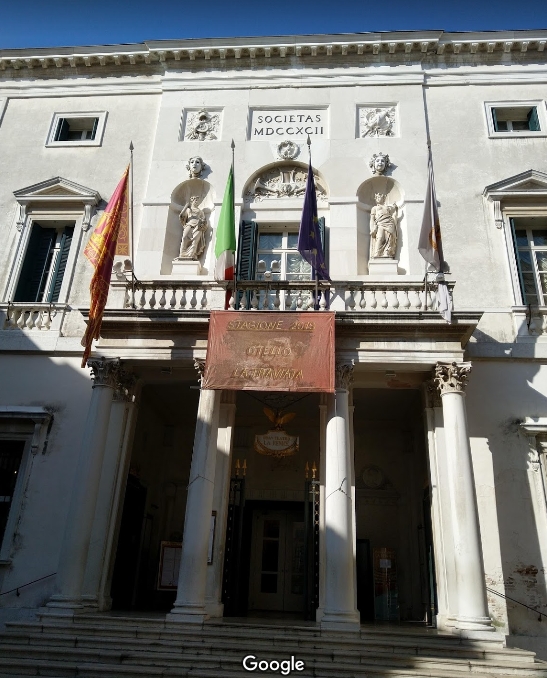 Last tour of the day is 5pm, and I was ten minutes early. In Italian, they give you headphones, which I half listened to as I continued to try to understand. We raced to the stage, as the stagehands were going to begin moving the sets into place for this evening’s performance, and once in place, we’d not be able to venture backstage. From there we came into the floor of the auditorium. A beautiful jewel box. Finally, to the loge boxes, where we could also see where the “crush bar” is set.

It was just past 6. I had really wanted to get back to the hotel to freshen up, change my shirt and put on that tie and grab a sports jacket. But my ticket for the evening performance of Rigoletto was a 7pm curtain. The walk was about half an hour, 2 kilometers each way. Just not going to happen. Besides, I was so far up in the gods that I was in the last row – and I couldn’t get to hobnob with the hoi polloi if I wanted to – there’s a separate entrance for those in the nosebleed section.

A nearby wine bar, Vino Vino looked like a place for a quick snack. A glass of red and a small pizza with prosciutto, artichokes and mushrooms could be done quickly, and I’d not have a growling stomach during Verdi. I did remember to raise my glass in memory of Nana, my father's mother, whose birthday is today. Out of there at 6:40, I was climbing stairs 10 minutes later and seated before the lights were dimmed. The folks seated nearby were all similarly under-dressed, but comfortable.

The lights went down. The conductor entered to applause, and the overture started. I could see the stage, but with no fine detail. Rigoletto is one of my least favorite opera, but it was the experience that counted. Two intervals gave me a chance to stroll a bit and people watch, listening for various languages.

Written for originally for La Fenice in 1850, Verdi’s story has been updated 50years from the period of absolute rule by the Duke of Mantua to a contemporary insane asylum. “Set in the brilliant world of the Duke of Mantua, an absolute ruler with very few morals, the action plumbs the depths of crime, but the libertine doesn’t get a retribution as the angelic girl Gilda pays for his misdeeds.”

Three plus hours later, I was down on the plaza under stars and scattered clouds. Alternatives for getting back to the hotel involved using ferries on the Grand Canal or a walk crossing smaller bridges. As I’d have an all-day ferry pass tomorrow, I decided to stroll home, particularly since the weather was behaving. Nearly 2 kilometers and 10 crossings later, I strolled into the hotel. There was plenty of pedestrian traffic to allay any fears. Relating my day to the receptionist, he was amazed at what I’d accomplished. Fortunately, they’d already carried my bag up two flights, so all I needed to do was get the key and climb myself.

Good size bed in a room with enough space, a very modern bathroom, and a window looking out over the street. After opening the bag, I hung up the parka and two jackets, put the kit on the sink, and fired up the netbook. Batteries and phone got charged, photos got downloaded, and final journal entries made before I tackled this narrative. My ViaHero instructions said to be out the door by 9:30.