Awake just after 7, showered and packed, I checked out of the Hotel de Normandie and headed back to Maxine’s to get coffee and another super egg baguette. Armed with food, I continued to the Gare d’Amiens (train station) where I found my local train leaving at 8:25. Four cars, my Eurail pass relegated me to second class and I wound up sitting backwards with my roller squeezed between seats. With a table I was able to eat my breakfast without getting it all down the front of me. I then looked at emails on my phone as well as watching the countryside roll by.

Today is May first, a semi-holiday in much of Europe. On the religious side, it is the feast of St Joseph the Worker, and the beginning of the month of the Blessed Virgin Mary. Socialism has declared it the Day of the Worker, so many commercial and industrial facilities are closed. And since it was also a Friday, people would probably take advantage of a long weekend, so a full train was not really unexpected.

My first destination today was #Laon. There is an ex-cathedral (former) up on the butte, and I had determined that I could leave my bag at the Tourist Office

as I toured and then also as I headed south to see the cathedral in Soissons. The station in Laon is at the bottom of this hill, with the top a great defensive location back in the day. I had to wait about 10 minutes (enough time to find the bus stop) to board the bus to ride to the top of the hill. Surprised, the Tourist Office abuts the cathedral! Rolling in the door, Bénédicte smiled and greeted me by name – she obviously had a great reminder system, because I’d not contacted this tourist office since November. [Note to self: send reminder emails!] We moved my bag into a corner, and she then suggested a coffee and a chat.

My quick train trip to Soissons began at 1:30, so I had some time. I wound up pulling the photobook #CathedralsToTheGloryOfGod out of my bag and leaving it with her, as I headed out to visit the (former) Ancienne cathédrale Notre-Dame. An impressive building, the two tall open towers rise mightily over the arched windows bracketing a central rose window above the main entry arch. A cathedral until 1802, the interior is bright and clean, with a warm glow coming from the columns. The high altar sits in front of a three-panel set of arched stained-glass windows below a lovely rose window.

Having some time, I took the long set of stairs (Escalier Municipal) down from the butte towards the station. Passing the church of St Marcel, I kept going straight, walking between La Poste and a small park. The train to Soissons was on time, and half an hour later, I’d arrived in this commune on the Aisne River.

A photo on the station walls from 1918 showed the state of the town following the Great War, impressing me with its resurgence over 100 years and another war.

La Basilique-Cathédrale Saint-Gervais-et-Saint-Protais was about a 2km walk from the #Soissons station. I had 2½ hours planned for my visit, so I set off down the very straight Avenue de General DeGaulle, passing the hospital before arriving at a rotary. As I approached the center of the commercial district, I began suspecting that the cathedral was the church up on my right. It turned out to be the Abbaye Notre-Dame de Soissons, a mid-millennial religious house now a historical site. The actual cathedral was off to the left, down Place Ferdinand Marquigny. 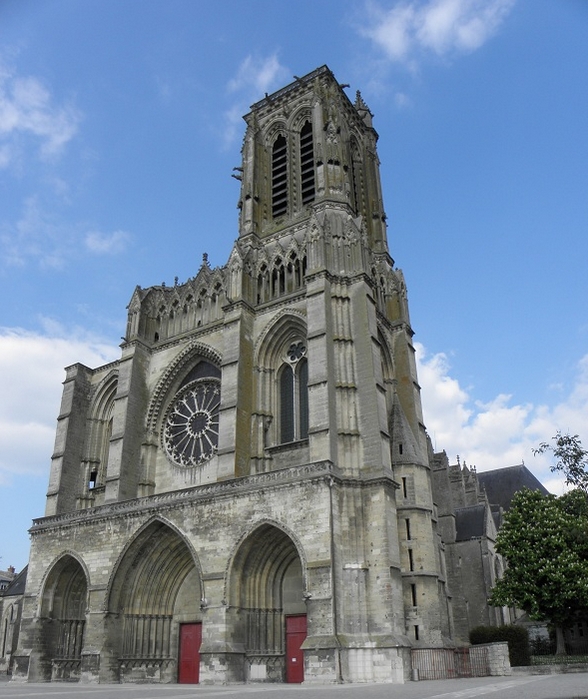 As I walked down the street, I first came to the rounded eastern or apse end, and continued on the north side to round to the main western entrance. With a single bell tower over the south vestibule, a large rose window stands over the arched main entrance. Without much natural light, the seven three-story tall columns separating the side aisle from the nave feel somber. The aisles continue beyond the crossing to provide an ambulatory with small chapel altars honoring a number of saints. The south transept is not as broad or deep as the north, is rounded and has a smaller rounded chapel serving as the baptistry off it. The high altar is traditional to pre-Vatican II, with a gold and white marble tabernacle. Two marble statues depicting the Annunciation bracket this altar, and the bishop’s cathedra sits to the left on a small dais.

Leaving the cathedral, I walked out in front and then headed south, taking an alternate route, following the road as it went through several name changes and veered to the southeast. At the Sous-Préfecture, I turned right going down Rue Saint-Jean until I reached the Musée-Arsenal, where I entered the driveway and entered the grounds of the ruins of the

Abbey of St Jean des Vignes. The two towers and connecting bridge survive of this very large old church, with nary a piece of glass in a window. Few walls remain, just traces of foundations show in the grass.

Tromping easterly through the field, I came to Avenue Thiers where I could continue southerly on Rue Racine, but chose to continue straight to the rotary and Avenue DeGaulle. The train to return to Laon was at 16:36, and was on time. Back in Laon I again rode the bus to the top, getting to the Tourist Office just before 5:30. I checked to see if the western light was playing favorites yet on the cathedral façade, but it was still much too early for that wonderful French golden glow. I collected my bag, presenting Bénédicte with a small posy of flowers I’d found at the local Tabac. Heading back to the bus stop, I had a few minutes before the ride back to the train station.

Boarding another regional train at 18:34, it was a 45-minute ride in a moderately full second class car to get to #Reims before 7:30. A terminus, there were no stairs to deal with coming off the platform to reach the street. Here was my first booking flub. I’d managed to book two non-refundable rooms for the same night in the same city. Hotel Crystal was closest, a 3-star hotel. The alternative, Latin Café Hotel, was over a restaurant and musical venue, and 2-star. I opted for the starrier one, and stayed at the Crystal. But I did go down the street to the Latin café and to pick up a key, as they had ben difficult about my trying to cancel back in early December. Be damned if I wasn’t going to make them give me a room.

At the Hotel Crystal I got assistance getting my bag up one flight of stairs. A nice room, there was just enough room to lay my bag open in front of the window once I moved the chairs. Taking my full backpack with me, I exited and headed to the Latin Café Hotel where I asked for my reservation. They were “complet”, or fully booked, assuming since my email conversation that I wouldn’t show. Showing them my recent confirmation email from hotels.com, they agreed to not charge me, and I thanked them and left the place. Back at the Crystal, I explained my dilemma to the woman at the front desk, and she smiled and said it happened frequently, that the Latin Café often sent people there when they proved to be over booked. Hiking upstairs, I dropped most of my gear in my room, switched the yellow parka for the heavier sports jacket, and returned to the street in search of dinner.

Albeit early for dinner, I had skipped lunch again and my tummy was growling since I’d fed it at breakfastime. (If I don’t eat at all, I can easily go all day until later in the evening.) Almost 8pm, it was almost acceptable to dine. Checking Google Maps for suggestions, nothing particularly jumped out. I turned around and went to ask the front desk for a recommendation. She suggested La Cantina du Coq, a French restaurant near to the cathedral. She suggested that I might get some nice setting sun shots of the west face of the cathedral before dining, so that sounded like a great idea for me.

The great weather gods were cooperating – it was about an hour until sunset at 9pm, and the sun was just sneaking below the cloud cover that had kept it partially cloudy all day. I was able to capture the western face, full of golden sunlight, and also some angled shots with the south side getting some light.

Backtracking a block and a half to the Cantina, after a discussion, my waitperson suggested the chicken and vegetable stew with couscous to start. It was a tasty big portion, and I finished it all. Needing a salad, I asked for the beet salad – beets are on my do-not-eat because beets can drive calcium from the body (they are one of 7 foods on the DNE list from my endocrinologist), but I’m on vacation and I love beets. With strips of beet, croutons, red and green leaf lettuce, scallions and a ball of mozzarella, it was perfect. Then the temptation – the hot gateau du chocolat, a muffin-like chocolate cake with hot syrup in the center, served with currents and whipped cream. My go-to dessert anytime!

In the glooming, I strolled back through the city center street until I reached the hotel. Heading up the stairs to my room, I advised the front desk that I’d be having breakfast at 8:30. Once in the room, I started crafting this report and the photos were downloaded, and I began charging the spare camera battery and the two cameras, as well as the phone.